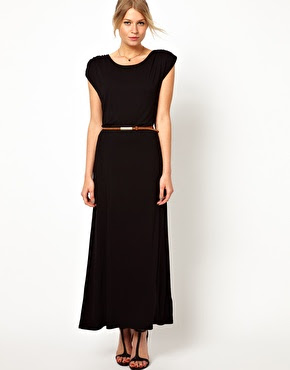 Comical to think I am buying any clothes right now- I'm not. BUT, if I were, how cute is this? Perfect for summer and fall and looks so comfortable! 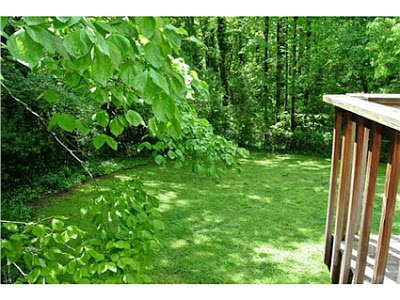 THIS WILL BE MINE ON FRIDAY!
(hopefully...and if not, you can find me in therapy)

One of my favorite things about new house is the big back yard for Woody and the dogs. Right now we are stuck in the townhouse, which is already not exactly the definition of spacious, but now is crammed full of boxes- including those from our storage unit. In our five years of marriage, we have never had a real backyard. Don't think I am above an above ground pool and year round Christmas lights. 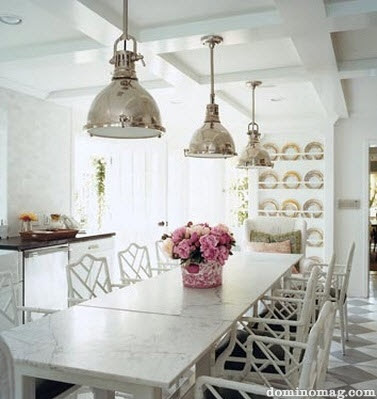 So I know these have been on every blog, and the odds of scoring them on Craigslist are slim to none, but I love these chairs. I vow that I will one day have them. And if you come over, I will make you sit in them. And tell me how awesome they are. And how awesome I am.

It's FRIDAY! One week from today we will have our new house! I can't wait to paint that bad boy pretty. (But it is going to need a whole lotta paint. Anyone wanna join us? Anyone?)

We will not be buying any furniture right off the back because
1. We don't need that much more than we already have.
2. I hate feeling pressure to buy furniture. I rarely like it. I like to just buy what I like whenever it happens.
3. Oh, money- gotta save those pennies (keeping it real.)

The only rooms we are gaining are an extra bedroom and a formal living room...aka my Ladies Lounge. I fully embrace that Woody's stuff will end up everywhere in my house, but I want this room to maintain some sort of "no toys allowed" status. (You can laugh at me in six months when this room had become his playroom.)

I would love a white settee, chippendale, or, lets dream big, chesterfield sofa in there one day. But for now, I was thinking of adding Woody's daybed in there for a temporary solution. 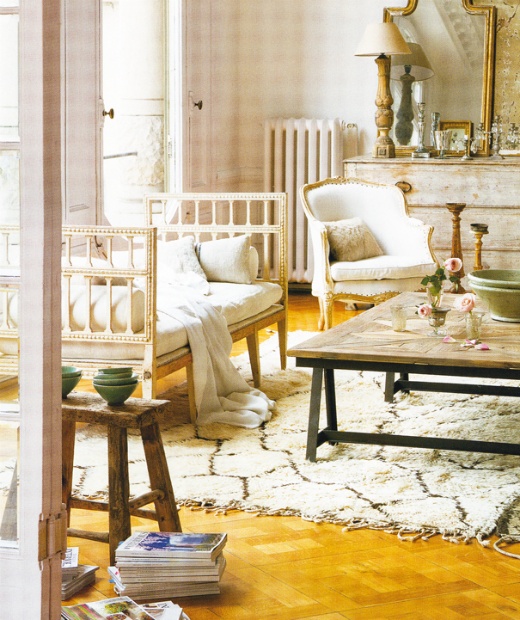 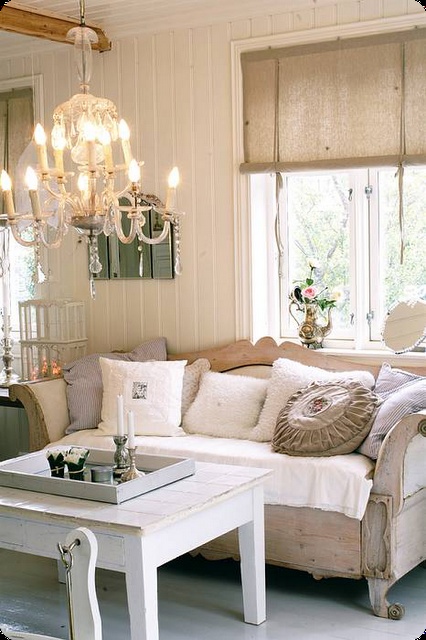 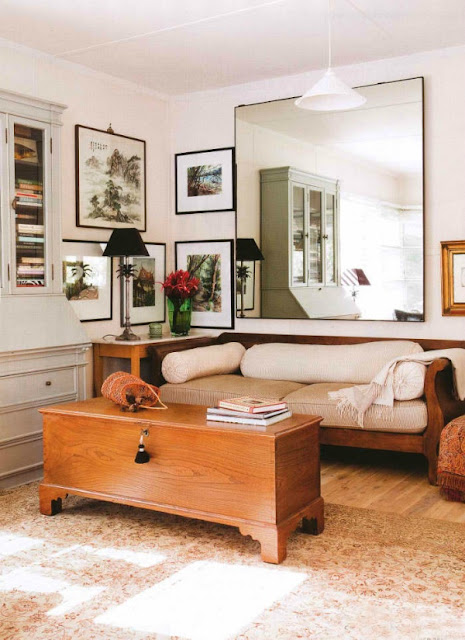 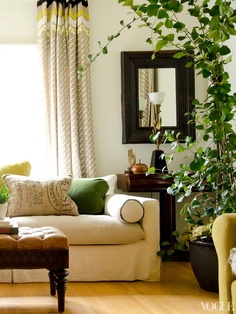 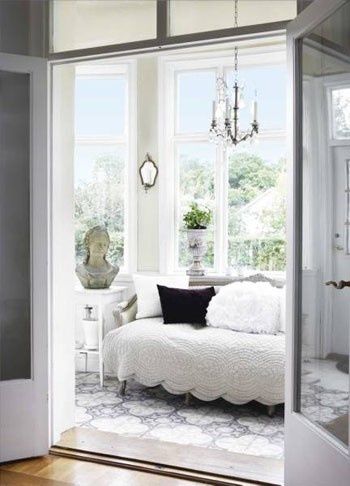 And because my mom will be mad if there is not a photo of Woody... 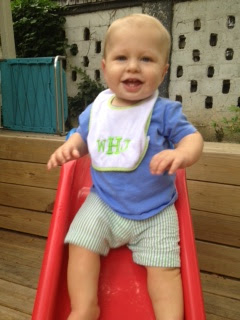 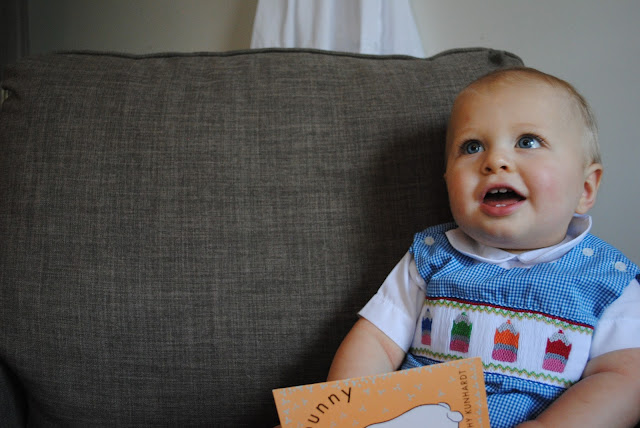 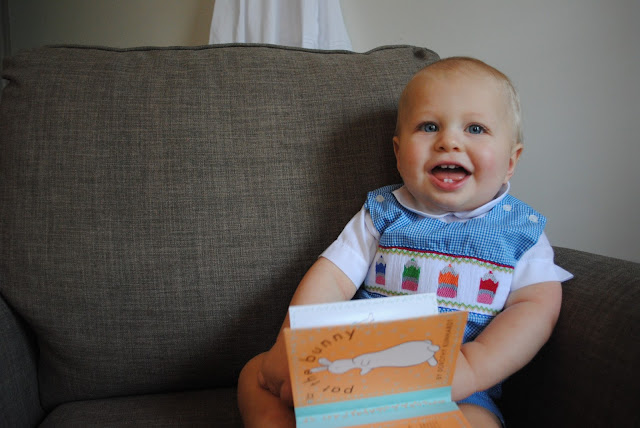 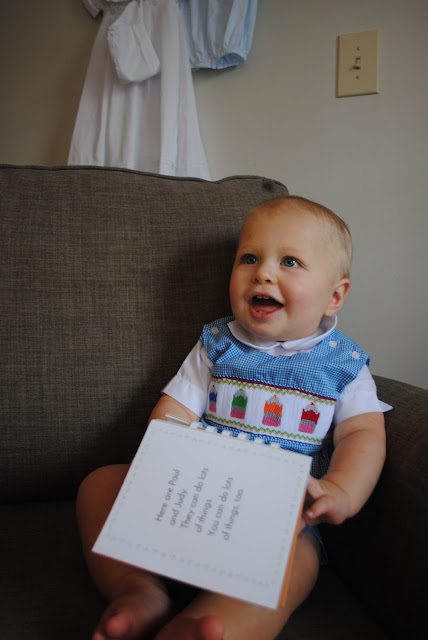 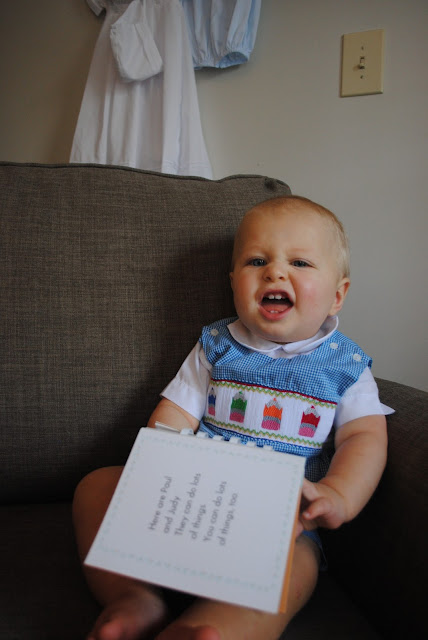 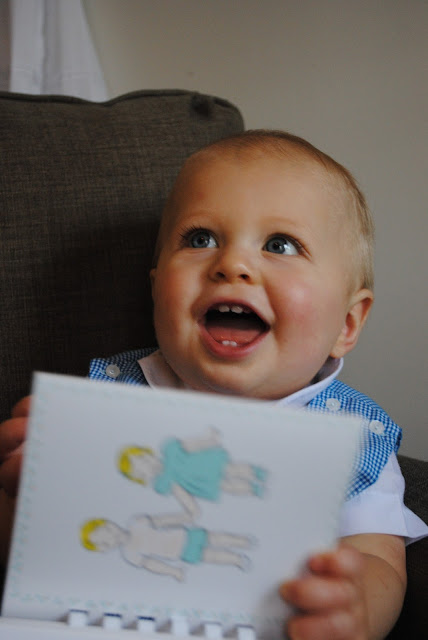 Since I took these on Father's Day, I was hoping to get a good Father/Son shot... 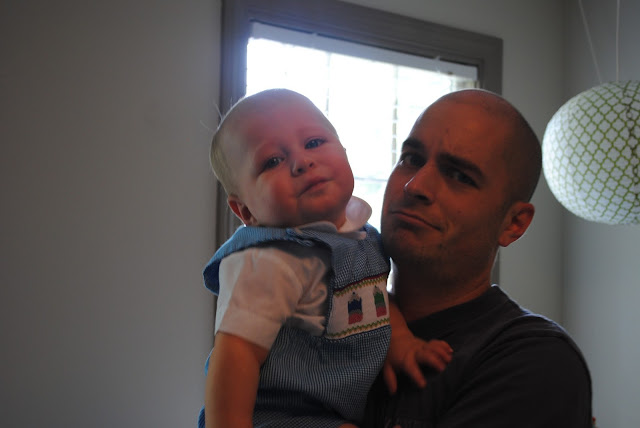 Not happening.
Much happier with his momma... 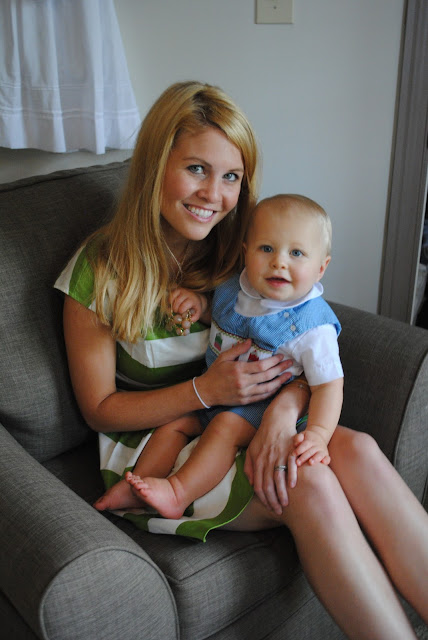 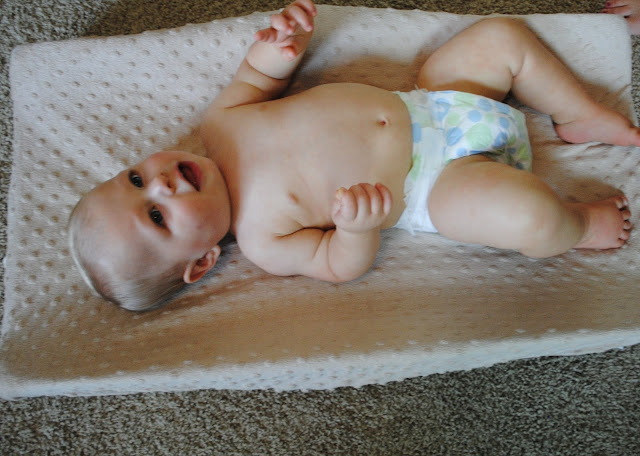 Not happy about naked photos on his changing pad. 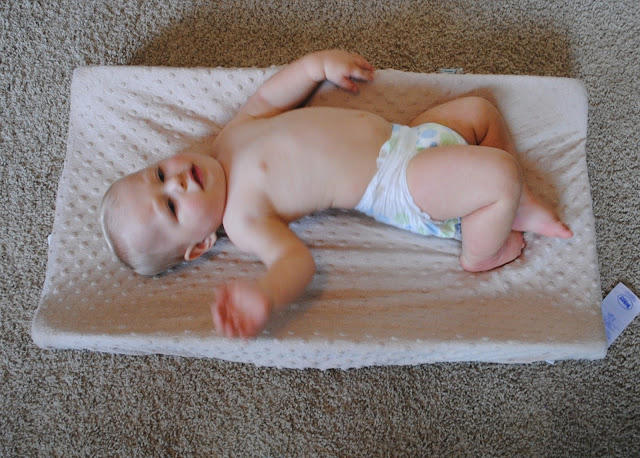 Email ThisBlogThis!Share to TwitterShare to FacebookShare to Pinterest
Labels: my life, Woody

Are you safe? Whew, those storms in ATL were crazy last night. The five of us (Brooks, sleeping Woody, Lucy, Winnie, and me) were in the powder room with no electricity. We got real close. Winnie was super annoyed that Woody had claimed my lap. Thankfully, the power came back a little after 7:00 am. (I am not sure what Woody would do without his morning cartoons.) 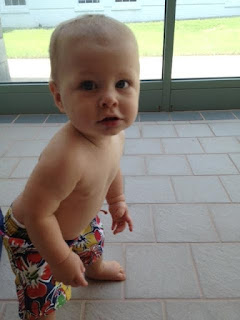 Seriously- I tried and tried, but I couldn't rotate this picture. Good thing he is adorable upside down.

And a very special Happy Father's Day to my baby daddy (Brooks..in case you were wondering) and my actual dad. I wish I could be at home watching you play monster with your grandkids. Woody loves to be scared, and nobody can take it to the next level like my dad. I love you and can't wait to see you in July!!!

Email ThisBlogThis!Share to TwitterShare to FacebookShare to Pinterest
Labels: my life, Woody

Sorry for that cheesy title. It reminds me of my friend, Suzy, so get over it. And let the randomness begin.

I will begin with some pictures of this stud... 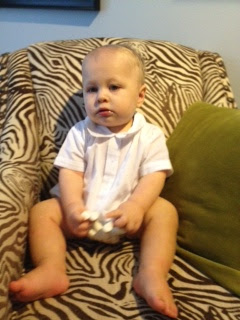 He was trilled about his church bubble. Thanks Cousin Jake!

And if you follow me on Instagram, you saw that my sweet Winnie Girl is back where she belongs. Initially, Woody wasn't so sure, but now he finds her hilarious. 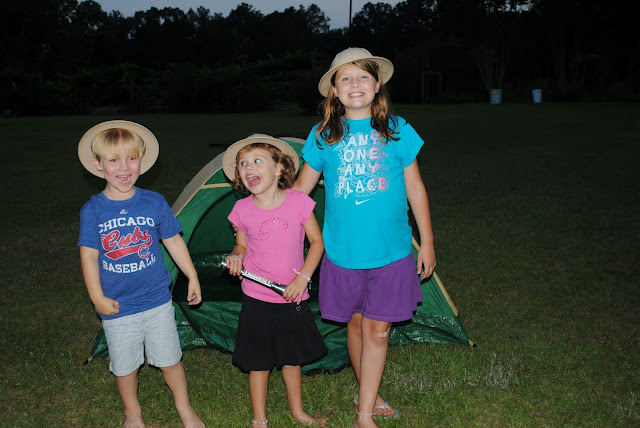 How cute are my nieces and nephew? Oh, and they are hilarious. This was a photo from their big camp out (that lasted until 10:00pm.) I wish we lived closer so I could make Woody stay in a tent for a while...cue sad tears.

1. We close on Vern in eight days. SAY WHAT!? Thank goodness we are renting back for a month and aren't officially kicked out until July.

2. New House (still out for debate on his name) will be ours on the 28th (hopefully.) He did really well on his inspection and appraisal (proud momma), but he just needs a slight face lift. We are going to paint and get some inexpensive window treatments before we move in, but that is about it. Changes will becoming slowly (because what is poorer than a teacher? a part-time teacher. Word.)

Most of the rooms are going to be neutral paint, but when I saw Erika from Urban Grace's Intsagram, I decided to zhush up our master bedroom. 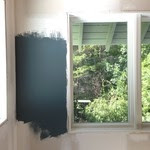 Yeah, I am a shameless copycat in virtually everything she does. Don't hate. I think this will work since our bedding and furniture are very neutral.

In Vern, we had to have white window treatments- thanks HOA. I am excited to have more freedom. I am bummed to have no budget. Hello Ikea Drapes, I will make you awesome. And I am really digging how these folks used copper pipes for their curtain hardware. 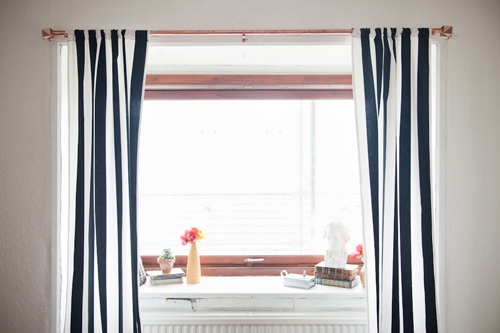 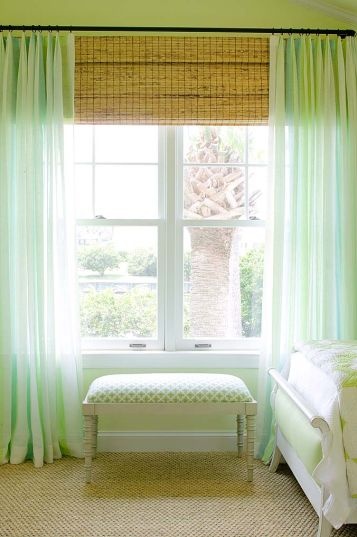 Thanks for checking in!

...until I wasn't. Sorry for the blog delay. Swim lessons have begun, and I was to busy trying to safely enter the pool while singing Humpty Dumpty to take pictures. Don't worry though, Woody has been practicing his floating technique in the bathtub. 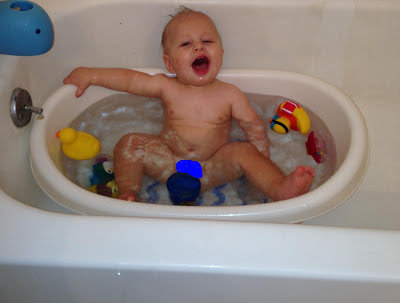 And the house? They accepted our offer and we have moved past the inspection! That's right people, we might have a home. Fingers crossed, and then some.

Sorry for the short post. One day I will get my life together.