Let's Talk About Pretty Things I Want and Don't Need 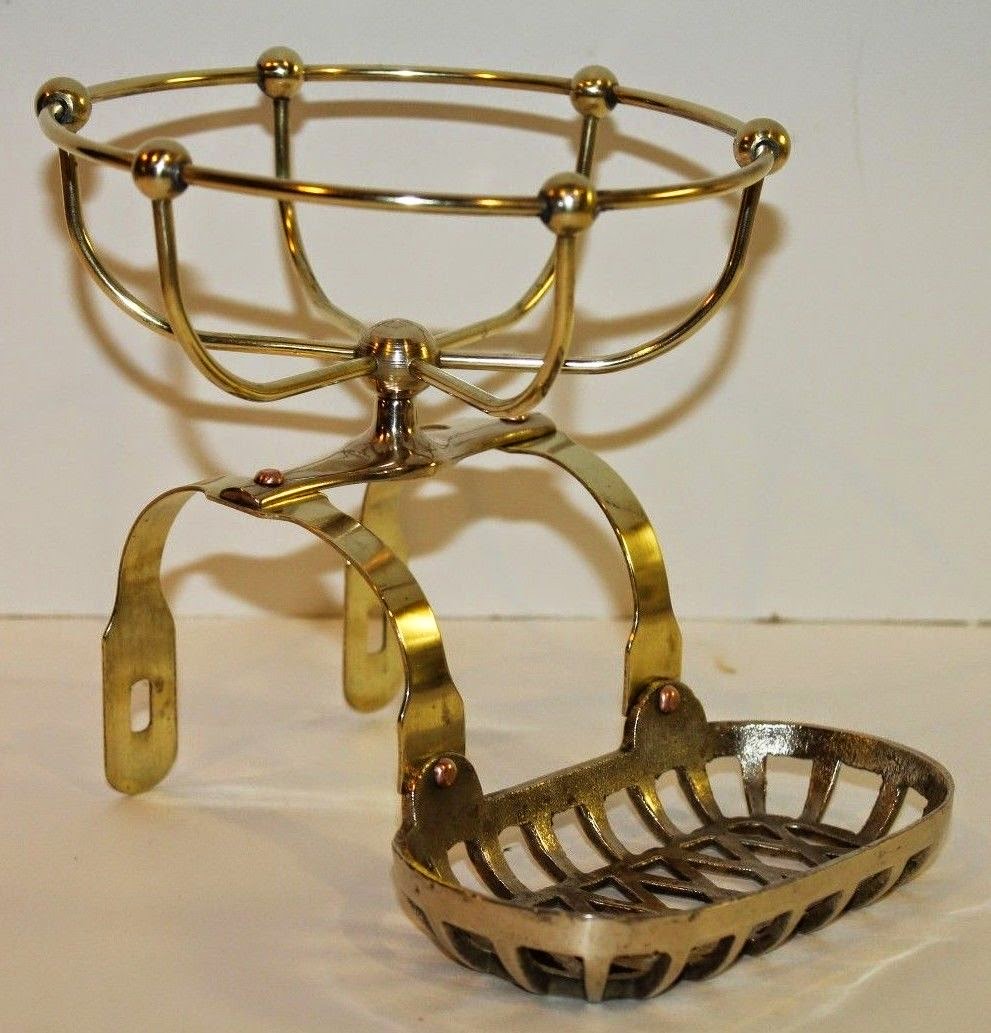 For Sale of eBay 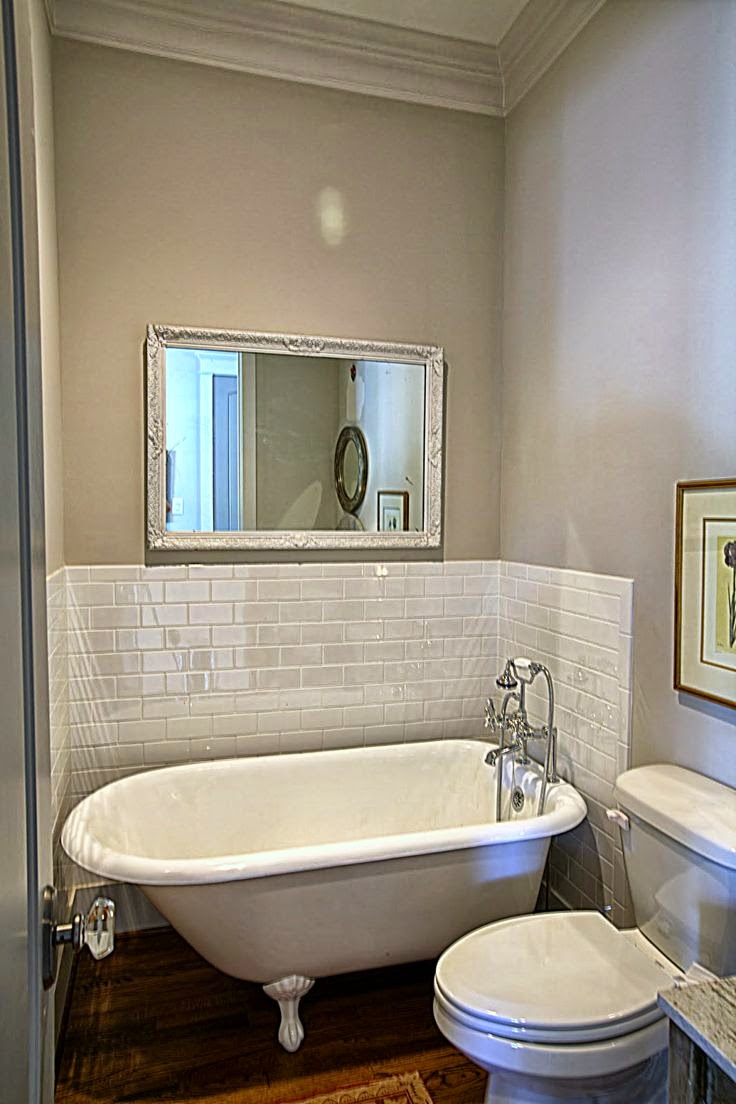 That's it. I am going to demo my shower myself to put this baby in. Of course in order to afford it, I will need to tap dance for money.

And I don't think I am that great at tap dancing anymore. 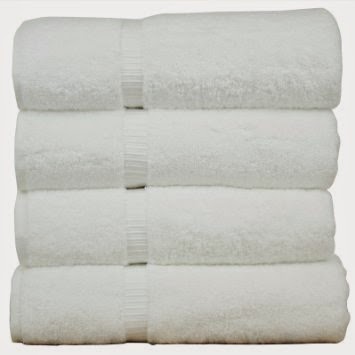 When Brooks and I got married, we received so many towels. I remember thinking how we would never need towels. I wish I could have told young, naive Lindsey that seven years in, towels get gross. I think these would be a nice replacement. 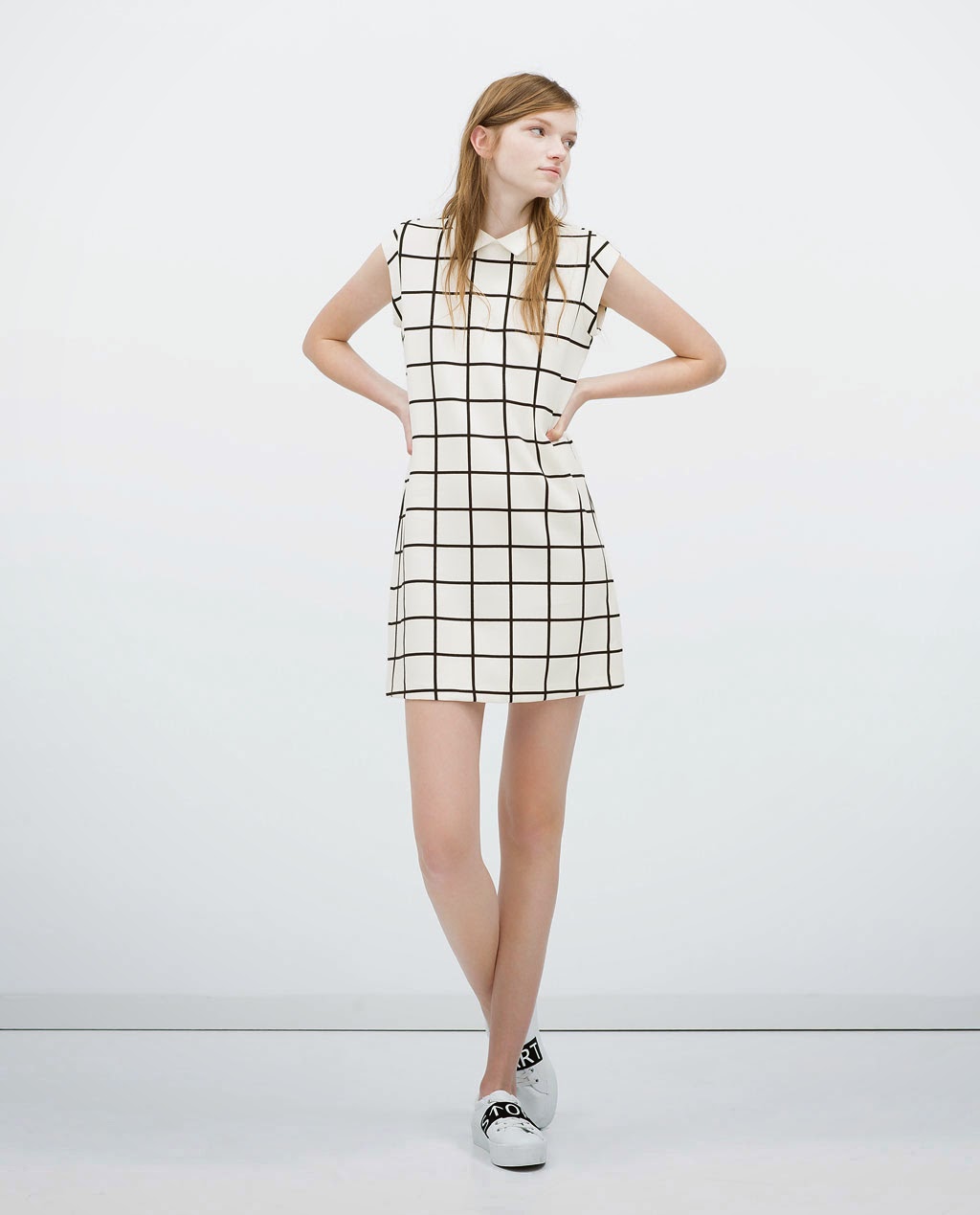 Side Note: Isn't it funny how when I started this blog, I talked about fashion and dressing as a teacher? Now I rarely buy clothes that aren't leggings nor do I teach. Sigh....

On a rainy or cold day (I can't remember which it was...maybe both), I decided to push the boys around the mall to get them out of the house. I even got brave and took them into a store. (Want to make your store seem less cool? Have a mother push her double stroller around.) I really liked this dress. I thought about trying it on, but I remembered previously mentioned double stroller and decided that wasn't a good idea. 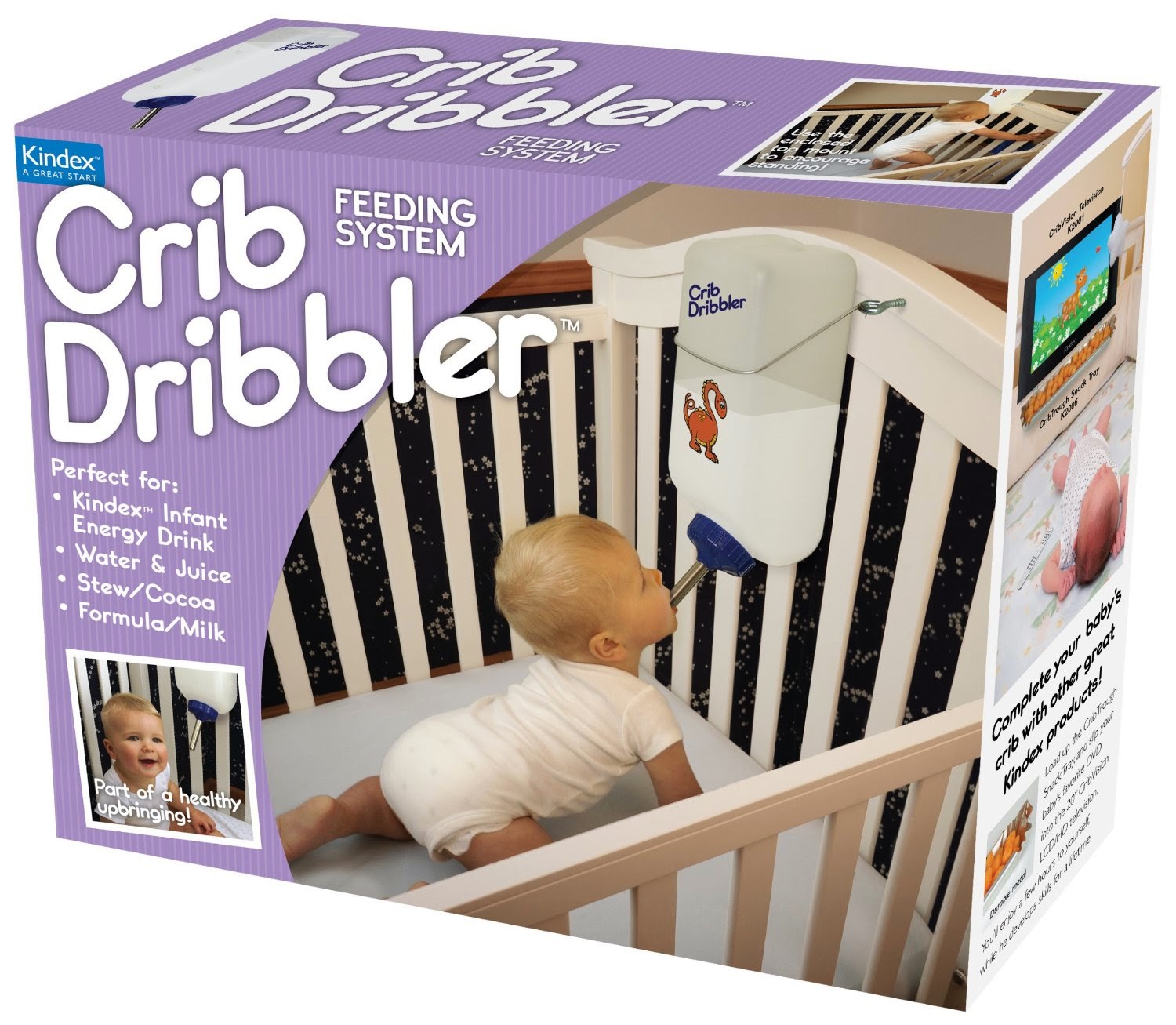 Gaines has apparently forgotten that he is almost a year old, and eating every two hours through the night is no longer neccessary. I think this might solve the problem. Momma's little hamster.

I better wrap it up. Woody is shoving puzzle pieces in my mouth. 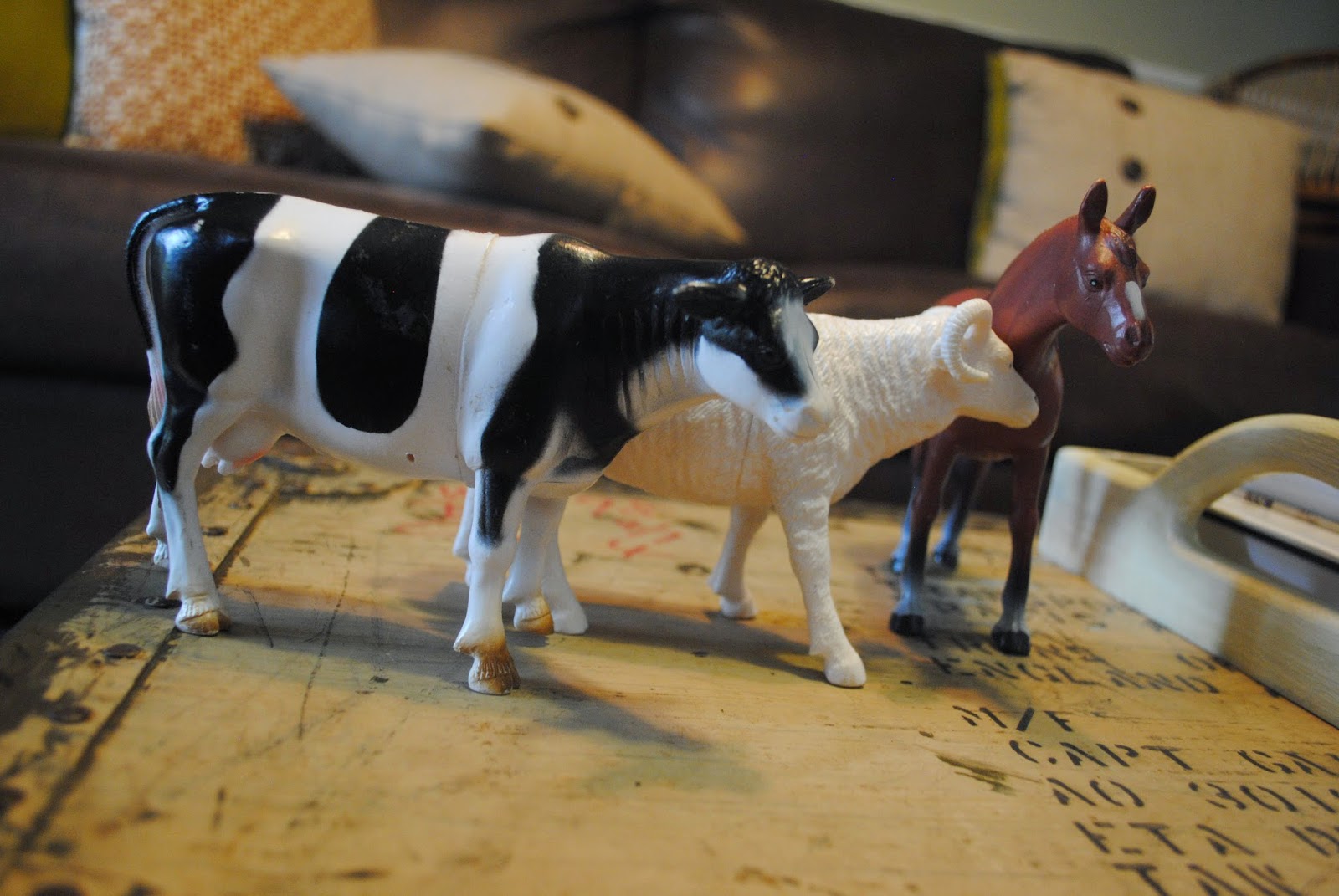 Brrrr! Is it so cold lately. I use to have the rule that we had to get out of the house every single day. Then this awful cold weather hit, and I am doing good to check the mail. I hate cold weather, so we have been keeping busy inside. 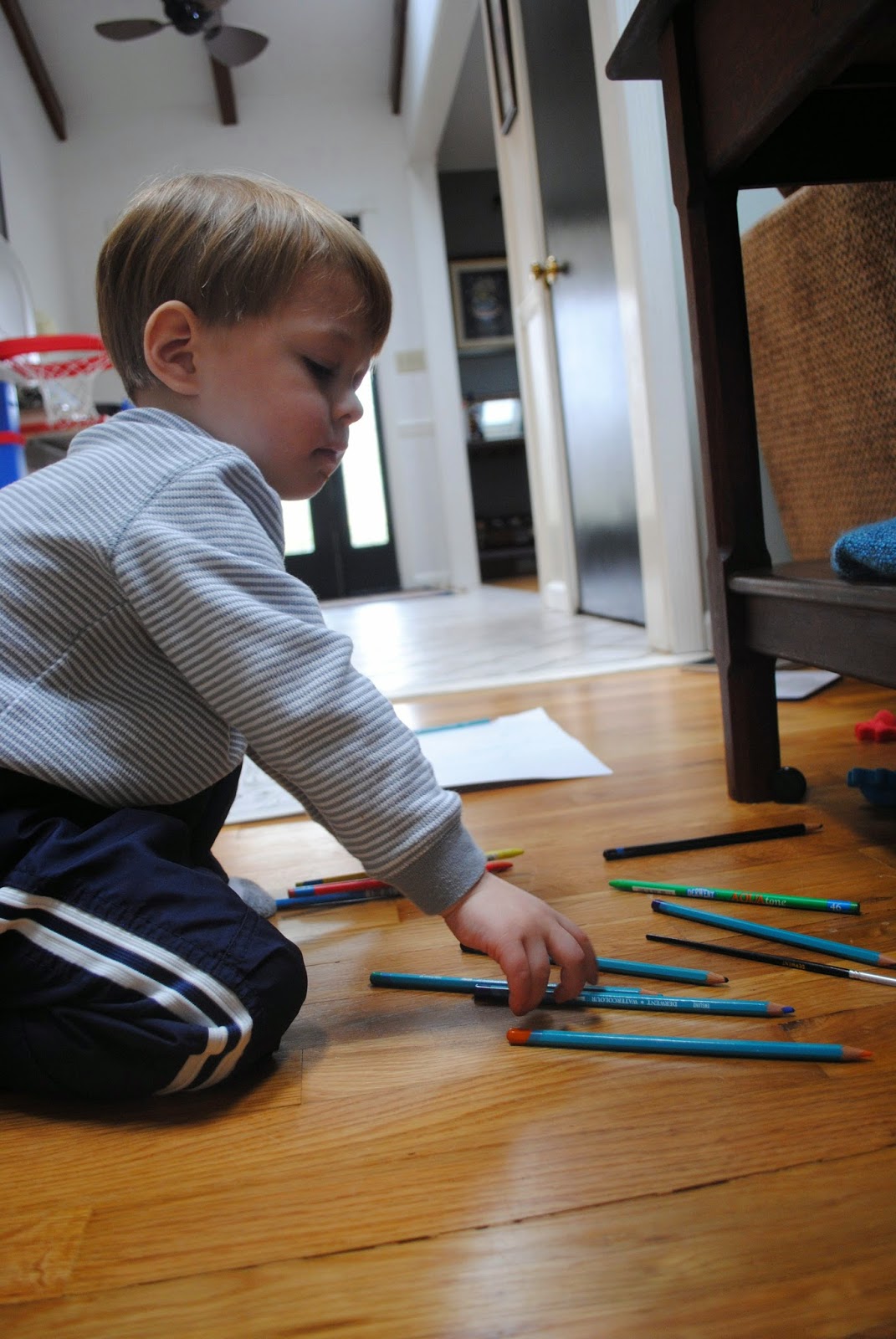 We have been double lucky lately. MePa visited last weekend, and on Wednesday, my mom came to visit! She just left, and we are all very sad. Woody stands at the door with his lip out when his grandparents leave. He will muster up the saddest "bye bye" you have ever heard. Of course they always bring him fun goodies. He got a tent from MePa and Nana brought him a new ABC book and a jumbo coloring book. He was super excited...until he realized he had no crayons. I was nice and let him borrow my watercolour pencils. 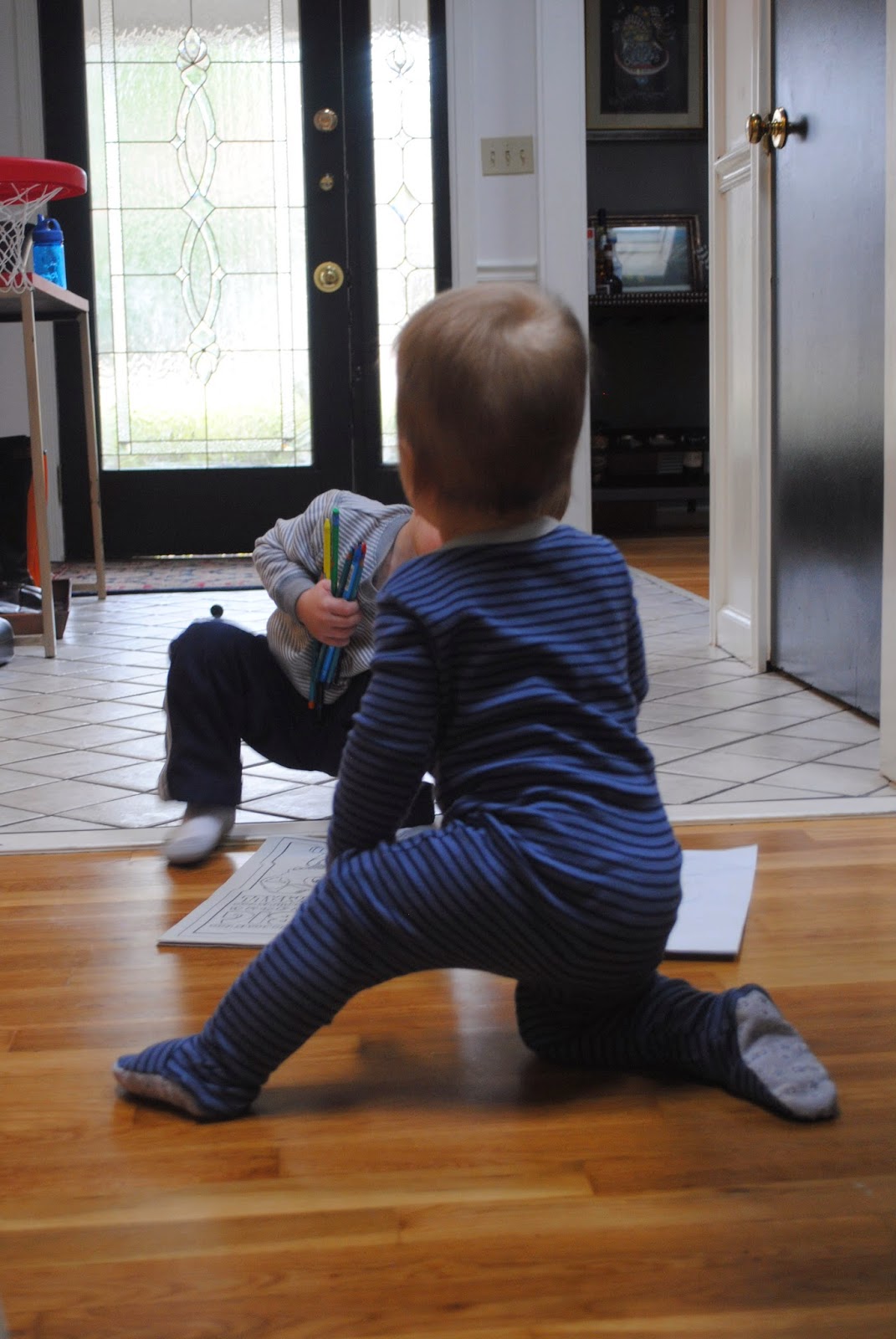 (We also stay in PJs way too late into the day.)


While Mom (or Nana) was here, she stayed with Gippy so that I could take Woody to have his hearing and vision tested, as well as to begin the transition for speech (we will not longer be in the Babies Can't Wait when he turns three.) 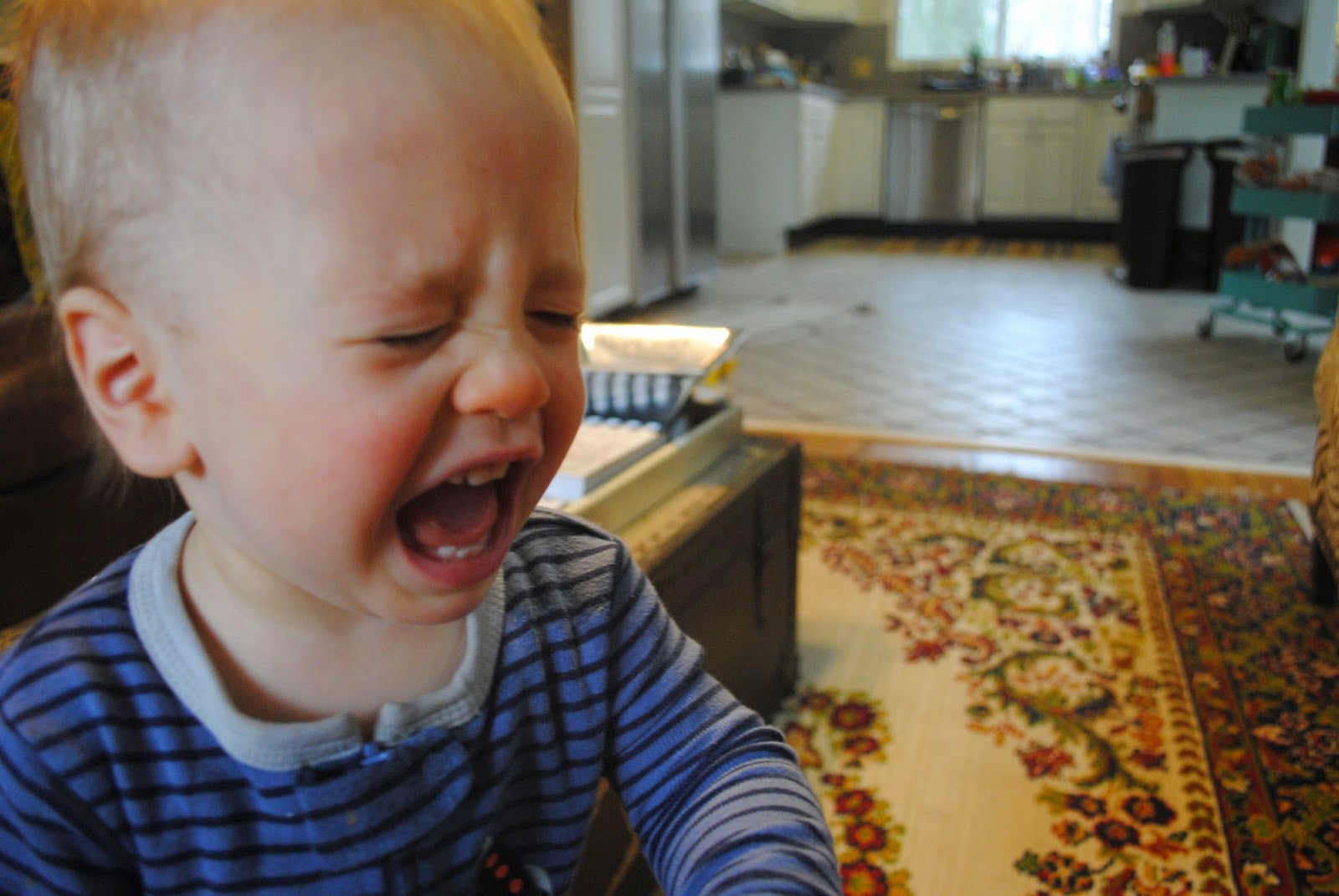 (How lucky am I that the grandparents don't go running and screaming?!)

I will save my opinions on the process (some good! some need improvement...major improvement), but Woody is improving with his expressive speech. We also confirmed that he has no vision or hearing impairments! Wahoo!

And speaking of Woody, he loves to climb over the back side of the couch and flip onto it. I have told him over and over to stop. One day I caught him mid-act.

Normally, he is a pretty good listener. He stared deep into my eyes as if he was processing what I said.

He didn't move a muscle. He stared expressionless at me.

"Woodfin James, if you don't get down you will have to go to time-out for not listening."

Usually, the combination of his full name and the mention of time-out will cause enough fear that he will do what I have told him. I didn't break eye contact as I watched him slowly slide back down to the floor.

"Thank you," I said as I turned to go into the kitchen, priding myself of my disciplinary skills.
"Weeeeeeeeee!!!" The joyful laughter of a child.

I couldn't believe it. My two year old was already trying to deceive me. Waiting until he thought my watchful eye was gone to do exactly what I told him not to do. He knew that if he did it, he would go to time-out (which he did and cried), but he did it anyway. When his 2.5 minutes in time-out were up, I began to talk to him.

"Woody, Momma told you not to climb on the couch. I made this rule because you could fall and get hurt. That would make you and Momma very sad. But you did not listen to me. You thought Momma was not looking and did what she told you not to do. That is why you had to sit in time-out. But I want you to know that I will always love you and want you be careful and safe."

What a stubborn child. And he gets it from his momma. There are things that I know are against God's will for my life, but I do them anyway, as if I think that maybe He is not watching me. Sin sometimes seems fun, much like flipping over a couch, but it hurts me. It separates me from my Heavenly Father, who sees all and knows the secrets of my heart. Just as Woody cried when I told him that I was upset with his actions, I cry out to the Lord to forgive me for falling short, for doing things that I know are wrong! Not only does He forgive me, but He separates it as far as the east is from the west. (That means he doesn't write a blog post about my sin. Sorry Woody.) Sometimes, when I think of my sinful ways, I wonder how God can continue to forgive me and love me unconditionally. But in some miraculous, indescribable way, He loves me even more than I love the precious children He has loaned to me.

If that isn't great news for this Friday, then I don't know what is! Happy Weekend!
Posted by Lindsey at 12:50 PM 0 comments 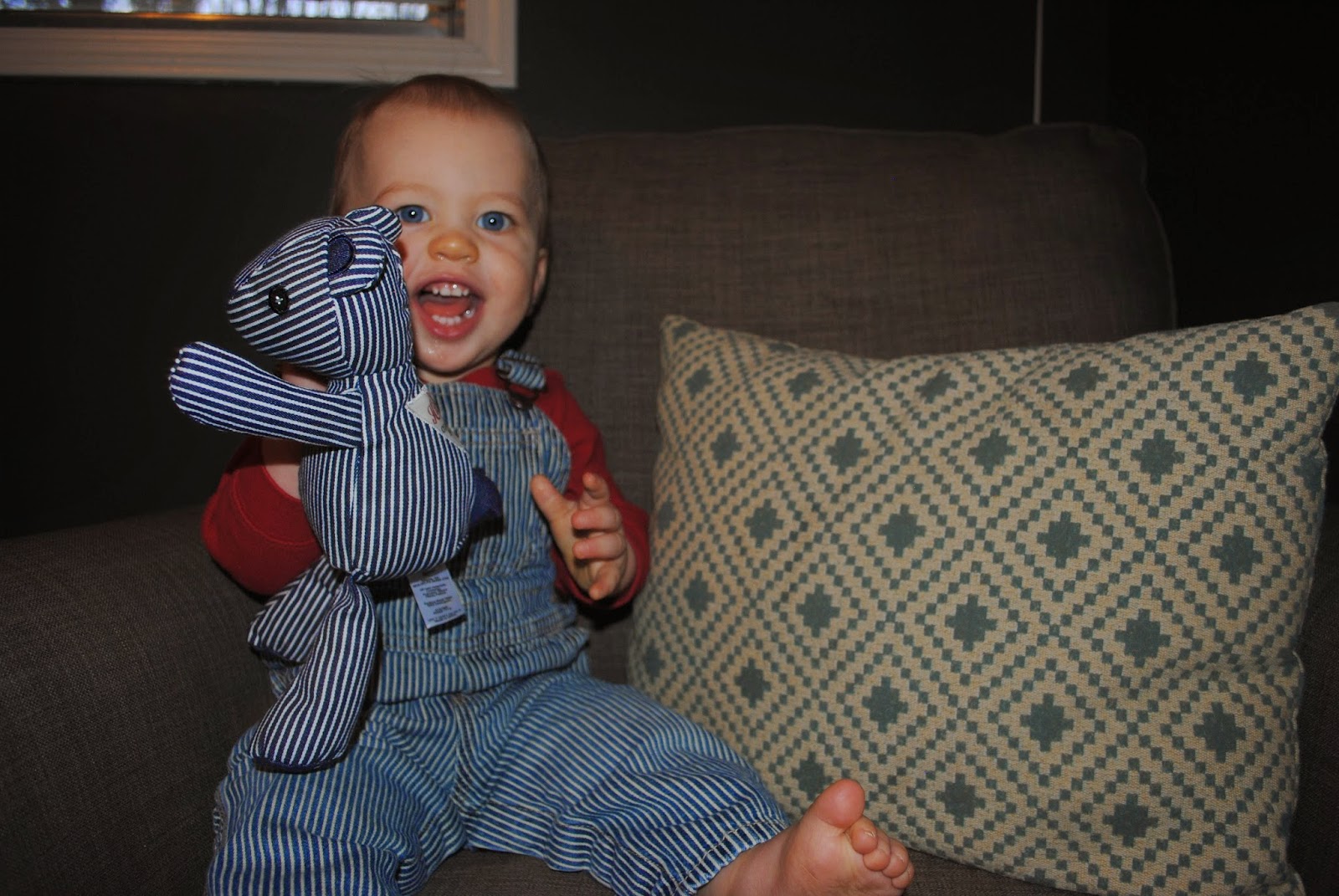 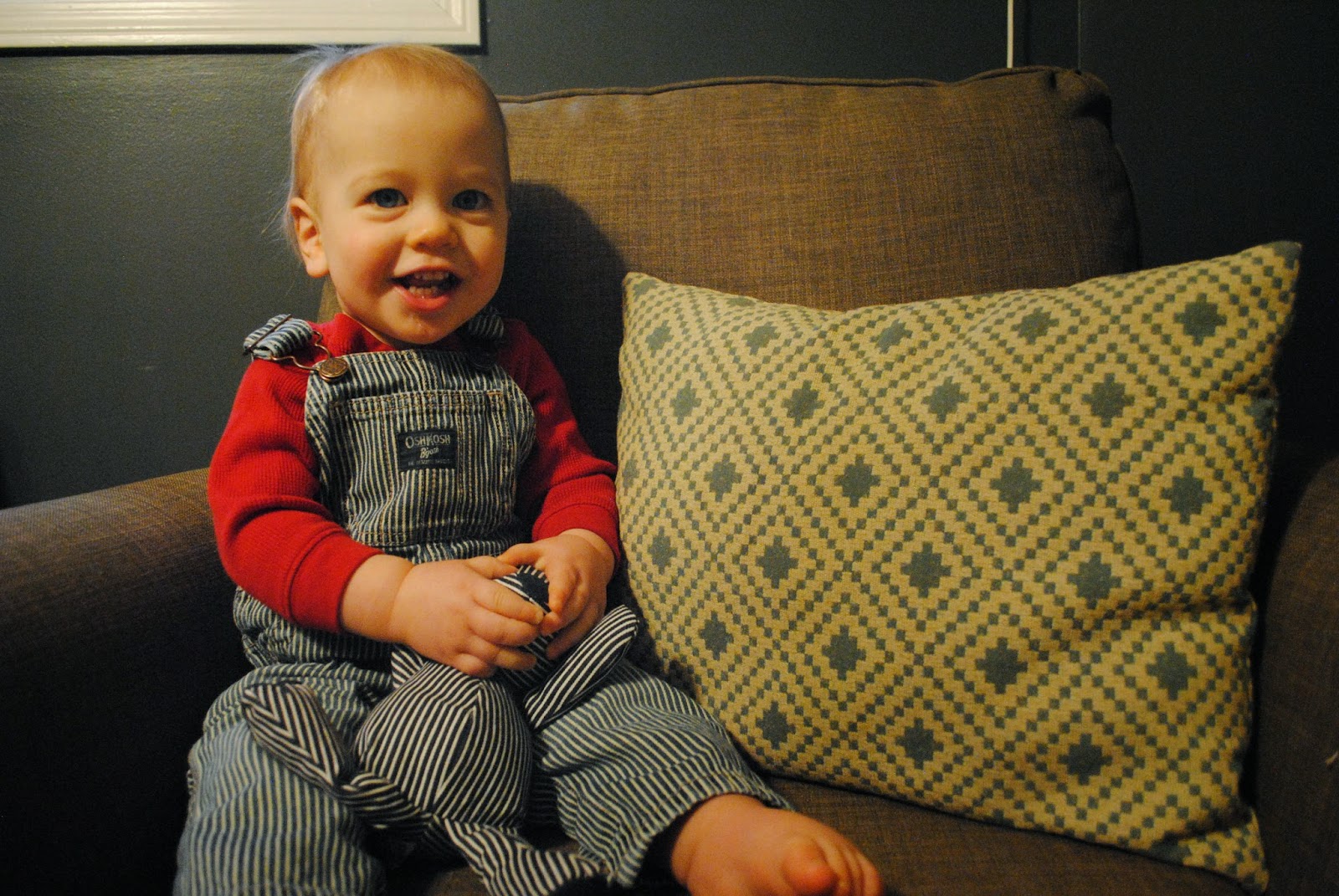 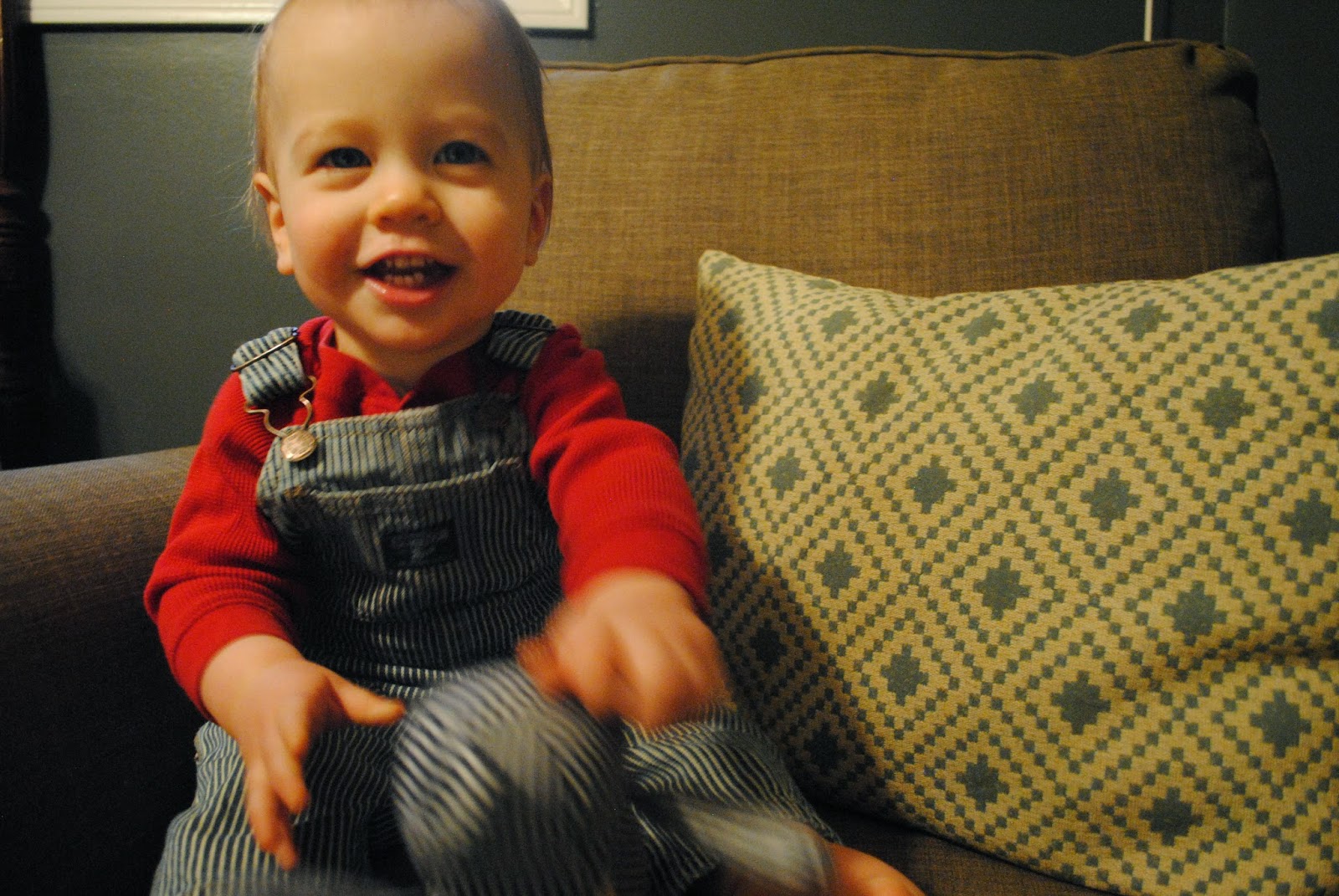 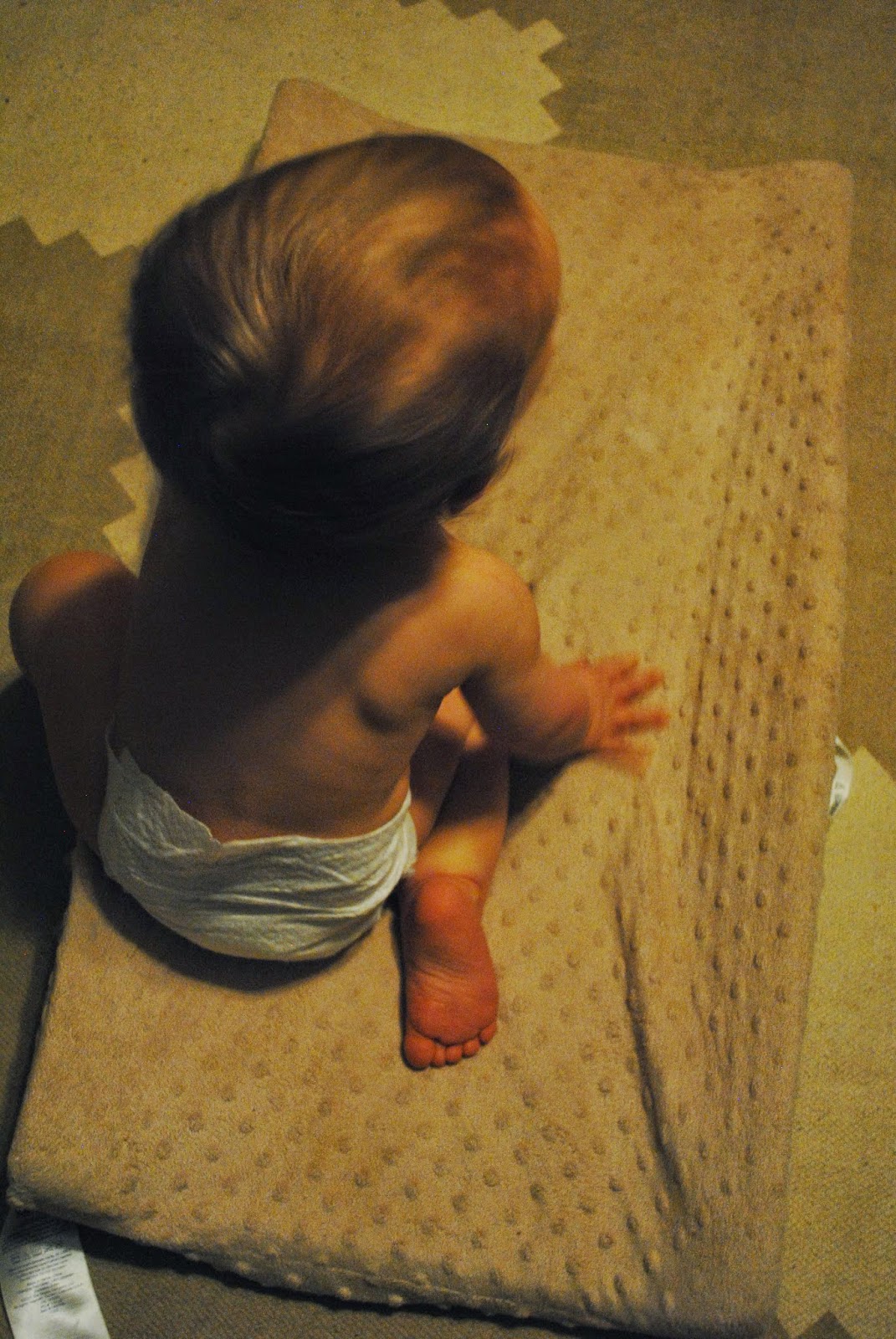 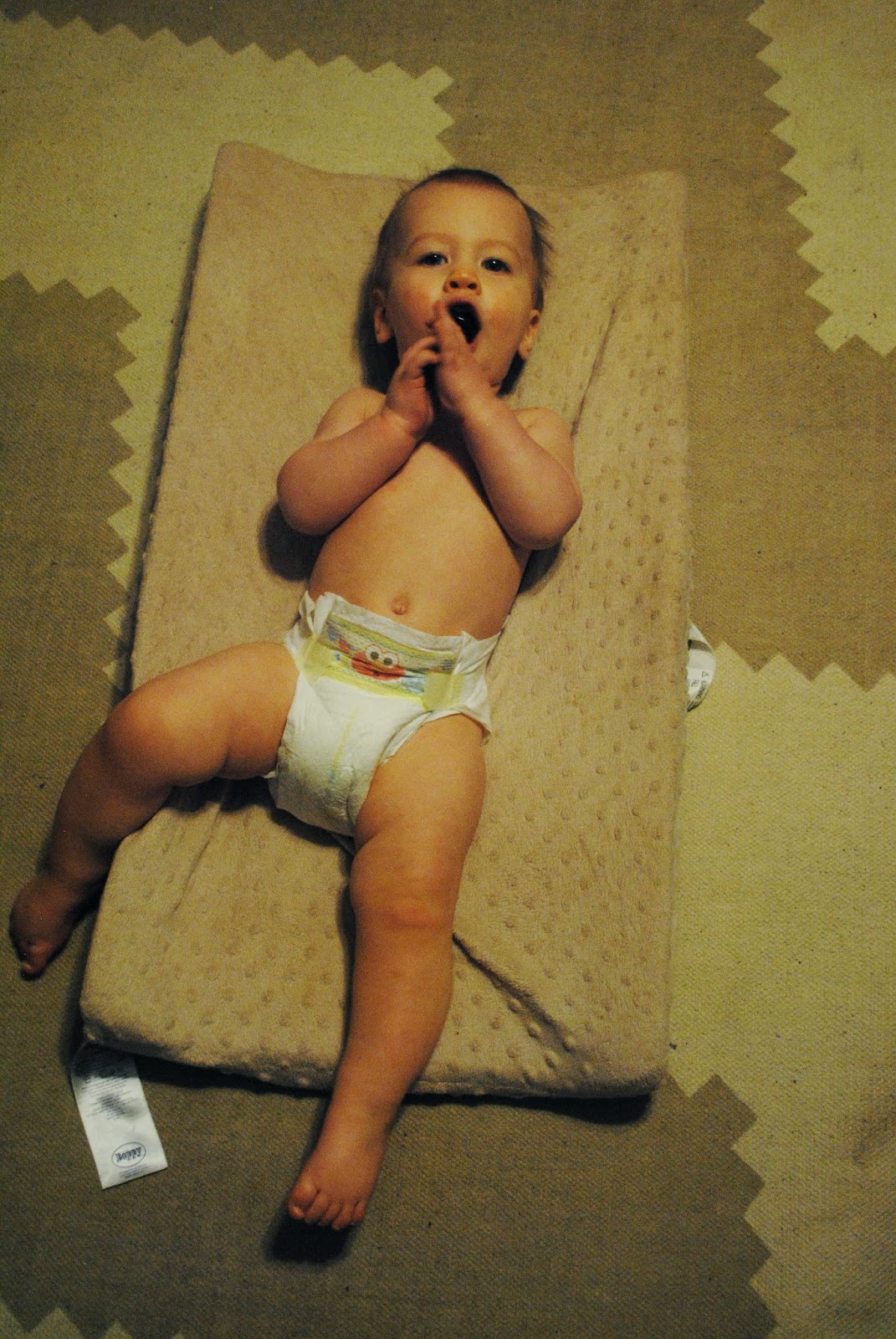 (Seriously, the best pictures I got. He hates being on his back. Diaper changes are super fun.)

Clearly, I haven't had much time for blogging. Actually, I haven't had the equipment to blog. I always used my laptop from when I was working to blog. When I quit teaching, I had to rely on Brooks's computer...which he takes to work with him during the day. I had only slightly been complaining about my situation. So my incredible husband, selflessly sold some of his climbing equipment (he hasn't needed those ice axes for a while now) to buy me my own computer. Raised garden beds and a computer? Sorry, he's taken.

So, what have we been up to? If you follow me on Instgram, you know that Gaines had croup last week. Yuck, terrible. It starts with this awful barking cough that will make any parent sit straight up in their bed. Luckily, the sound only lasted two days, but then it turned into an annoying cold that still stinks and makes your baby feel terrible.

I took Gaines to the doctor because even though there is no medicine you can take for croup, you can get an oral steroid to reduce the swelling in the throat. Unfortunately, every other child in Atlanta was sick, so the doctor's office was packed, and the only time I could get in was during the boys' nap time. 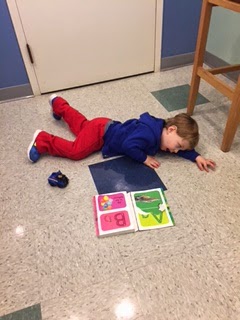 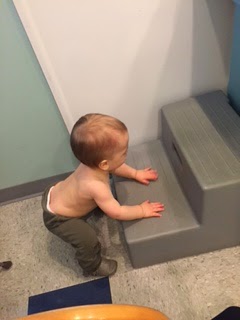 For every germ we were there to cure, I am sure we picked up ten more. 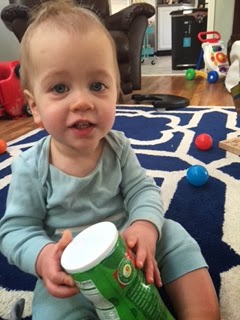 Slowly, but surely, Gaines started to perk up. We were playing outside and getting some fresh, cold air, when Woody insisted that Gaines ride his tricycle with him. So sweet when you catch them getting along. 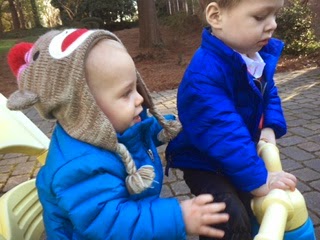 Woody celebrated Valentine's Day at school. He was a big fan of the mailboxes. Maybe he has a career in the postal service. 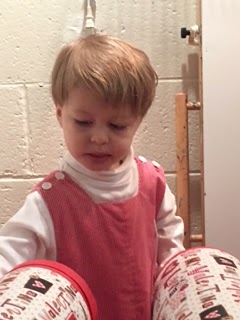 Despite his Valentines arriving late, I was able to throw together these that cost me a total of $1. 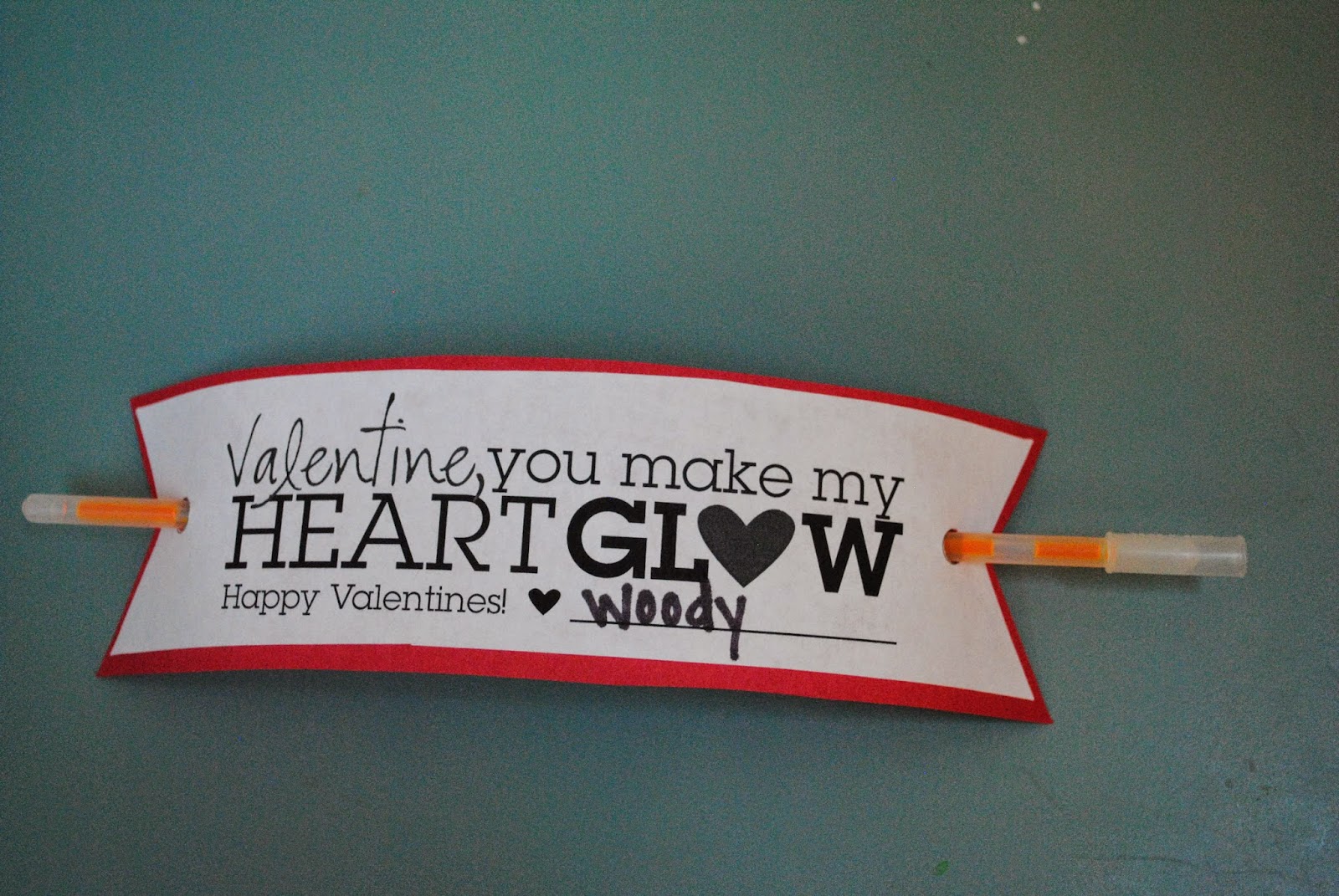 Gaines decided that his millions of toys are a bore, and banging a stick on a container of Puffs is way more fun.

Mimi and Papa, or as Woody calls them "MePa," came to visit on Saturday and brought the boys a pop tent. It has been great entertainment. The biggest excitement lately? We painted our dining room. It was still white (and a bad shade of white) from when we moved. (Oh, and in old news, this room was originally the formal living room, but we switched and it is now the dining room and the old dining room is Brooks's Dude Den/my "Ladies' Lounge. 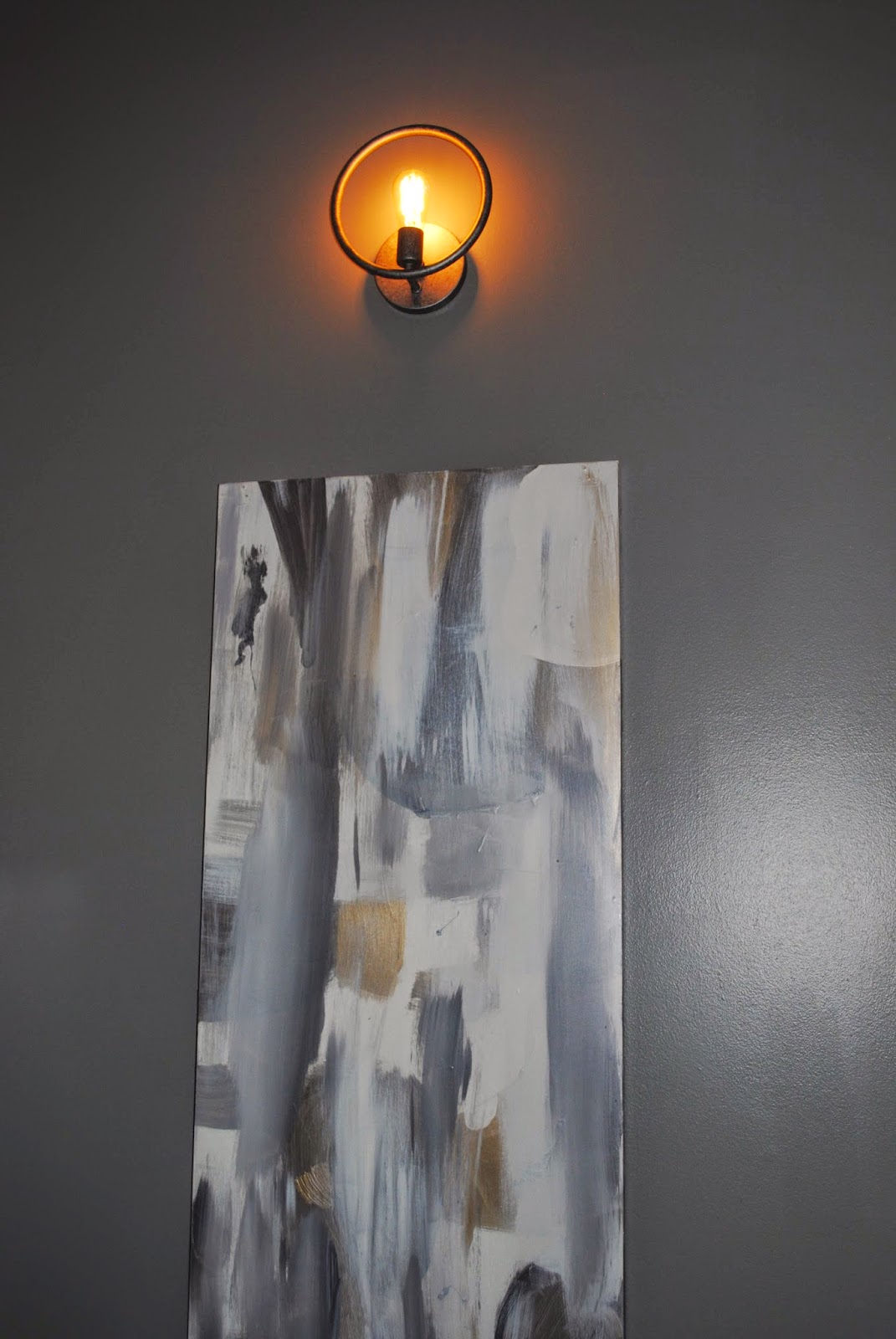 I will take better pictures during the day. Brooks and his dad replaced the sconces with these lights that I found on sale at Lowe's. The wiring was very tricky, but they worked so hard until the all turned on and off at the same time.

I will return with Gaines's 11 month update...before he turns 1 (tear) and an update on Woody's speech progress!
Posted by Lindsey at 8:37 PM 0 comments