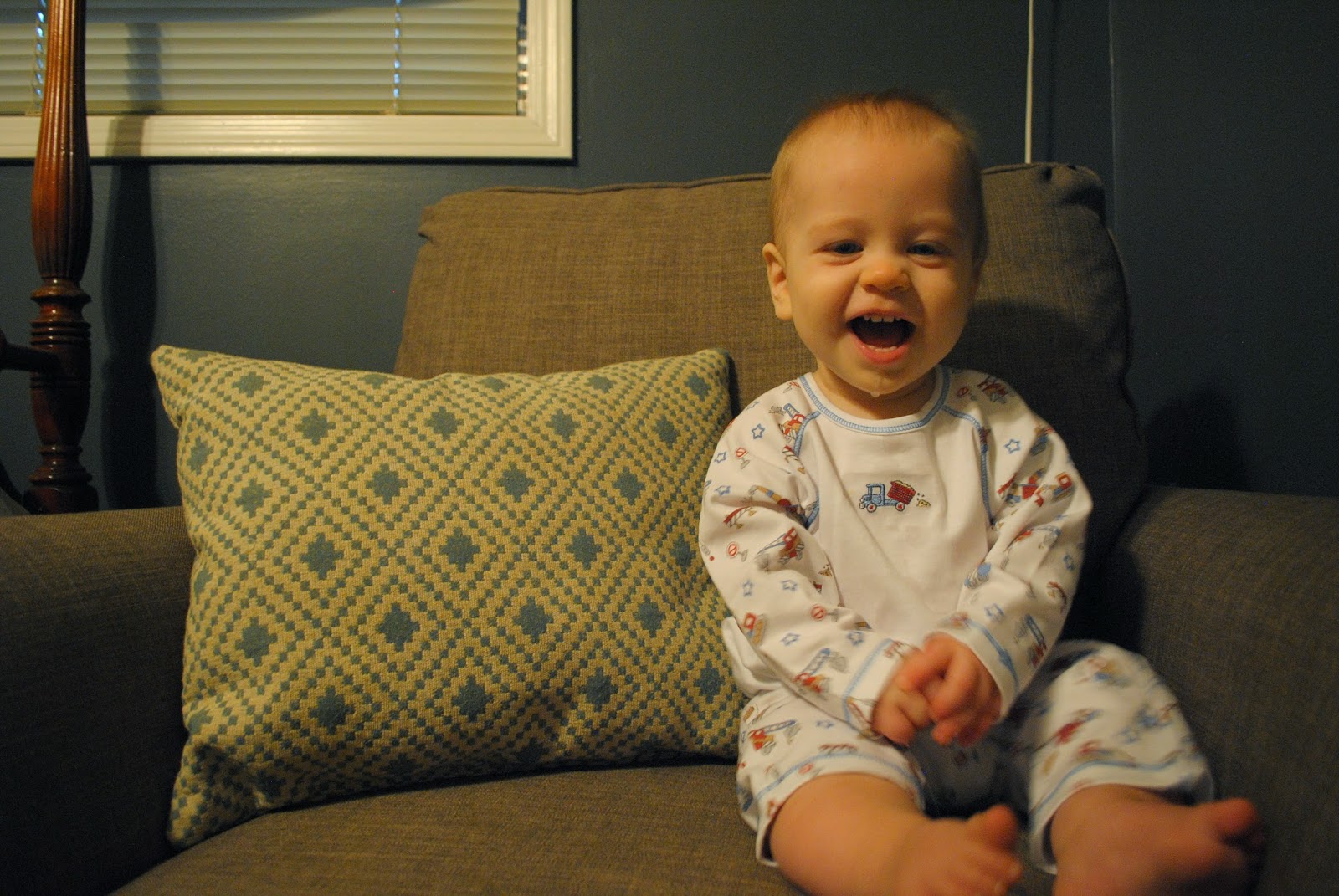 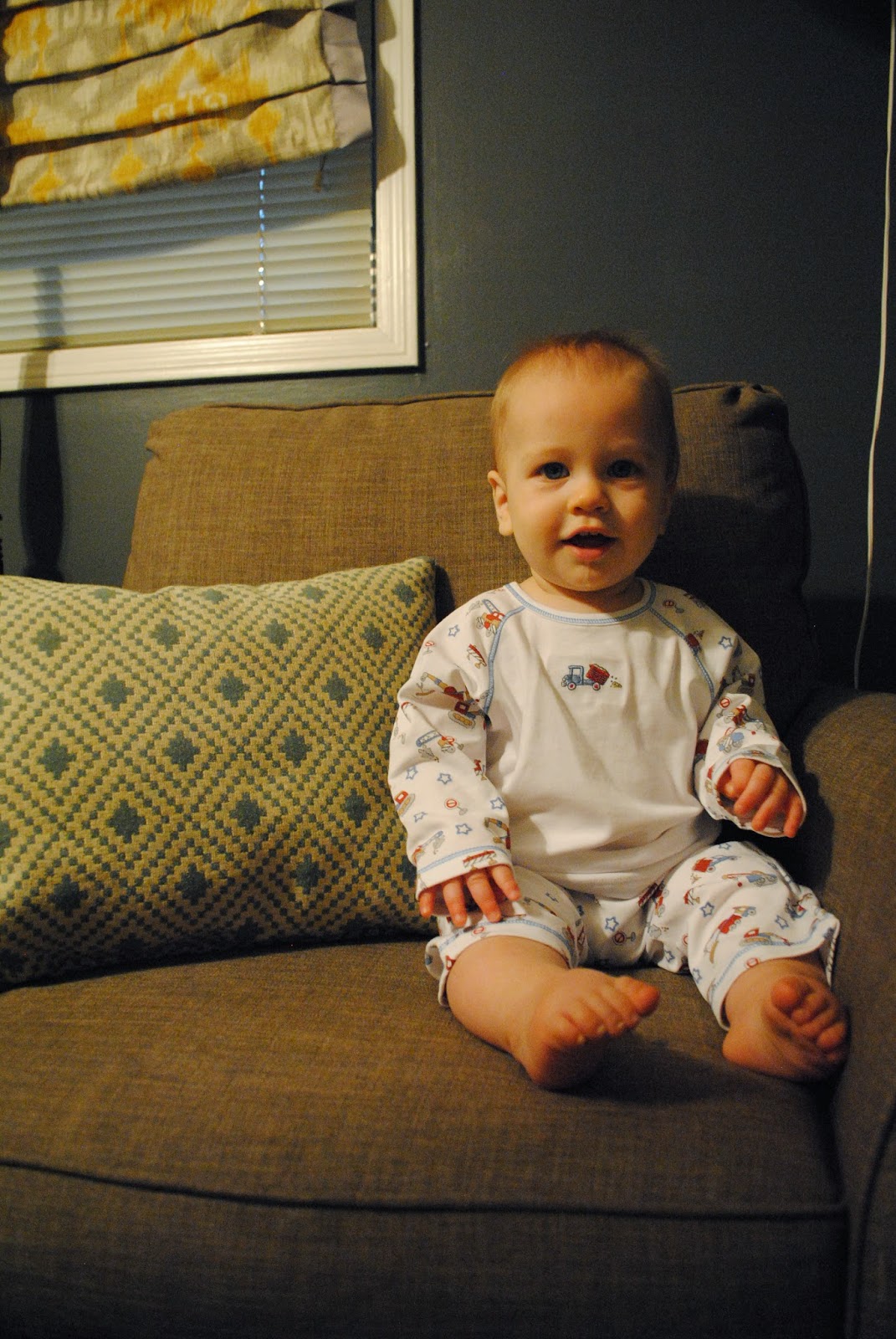 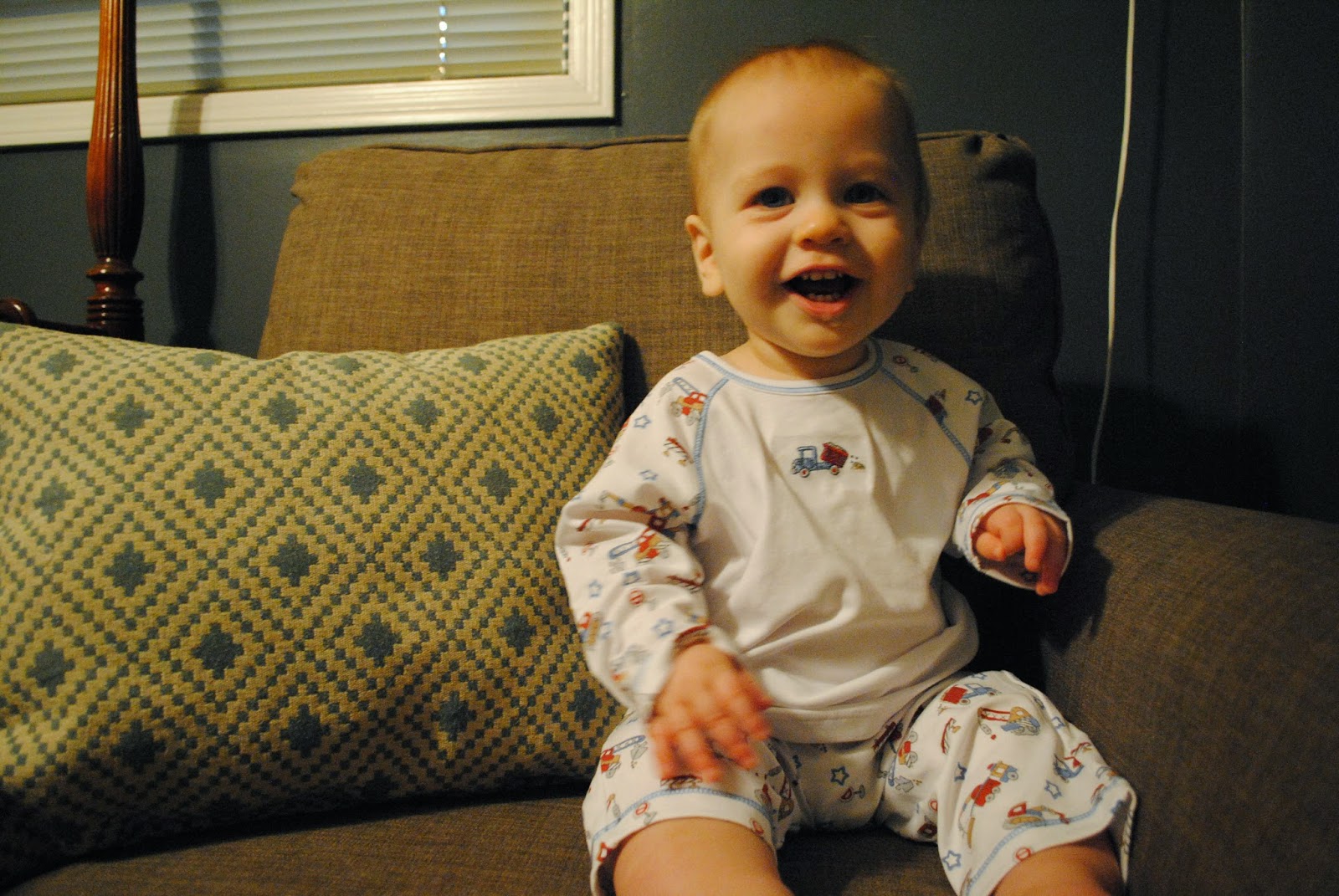 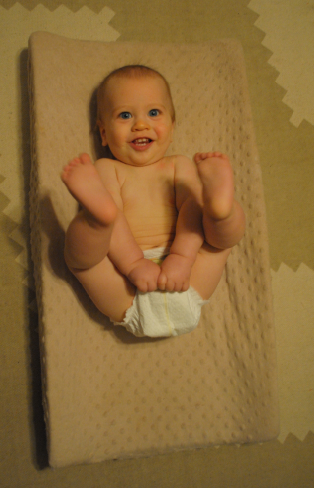 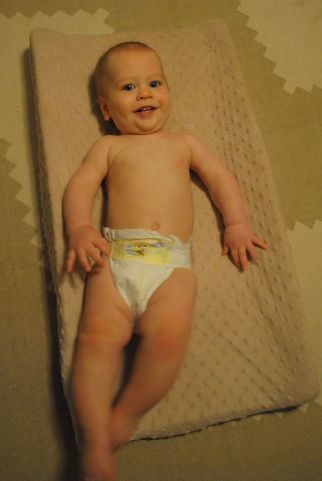 Can we talk about the Halloween I imagined? 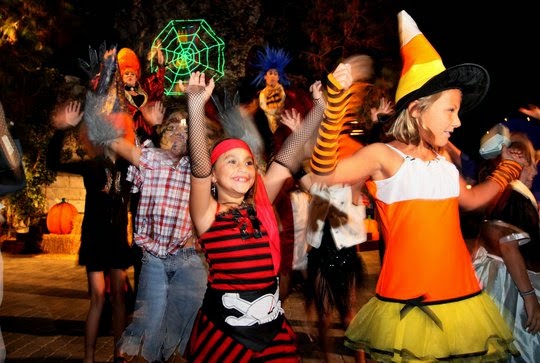 Now can we talk about the Halloween that happened?

Let's start with Cheap-o Momma who just figured that Woody would wear the costume that was in the hand-me down box from his cousin, Jake. Thank goodness I tried it on him and realized it was a 12 month size. 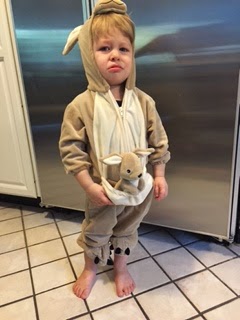 I didn't want G to miss out on the fun, so I tried his on too. It obviously was the perfect fit... 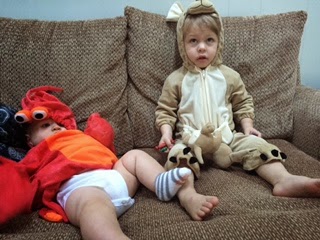 After a failed trip to Party City, my sister saved the day and sent some larger costume options for Woody. What would I do without hand-me-downs? Emma had a shark costume that I thought would go perfectly go with G's lobster costume. Woody could wear it to school on Tuesday and again on Halloween. I volunteered to help at Woody's school party (as well as every school party, like the psycho mom I am), and Gaines was tagging along. I was running late (surprise), and didn't have it in me to fight to lobster costume, so he was a football. 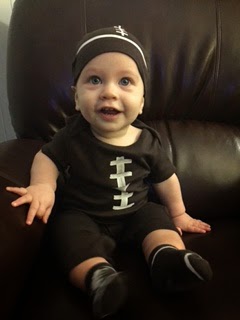 And Woody was a happy shark... 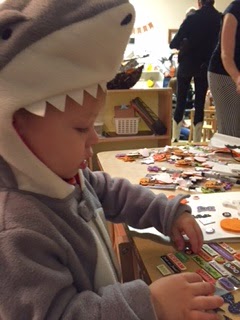 For all of 10 minutes. First of all, he didn't understand why both his (obsessed, stalker) parents were at school. He wasn't thrilled when Dad left. It annoyed him that Mom's attention was distracted by a football. He was upset when he had endless options of stickers to decorate his bag with. He became angry when Mom left (with the football) to set up for Trick-or-Treat. And he completely lost his cool when Mom gave treats to other children. You can imagine what happened when someone suggested to him that he leave his beloved mother and visit other moms for treats. 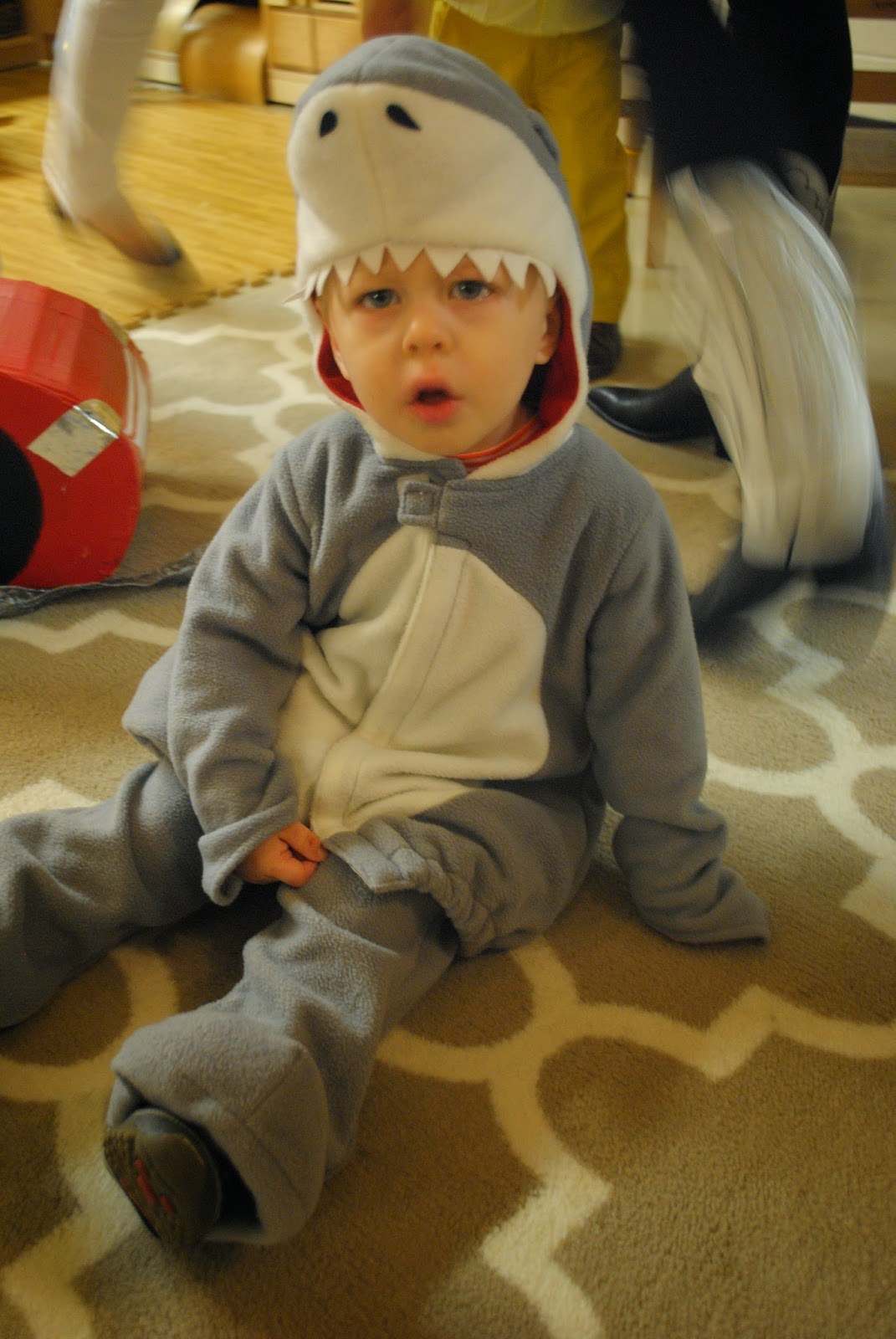 However, the real tantrum began when we came back to the classroom and someone had the nerve to offer him a snack. What jerks. (For a reenactment, see tantrum gif above.) One of his teachers suggested that he might do better if I left. I hate to tell them that I signed up for every party.

Fun Mom Moment: If he wasn't already having an awesome day, after his nap, he had to get his flu shot. #momoftheyear

At least he liked some of his treats (that were forcefully put in his bag.) 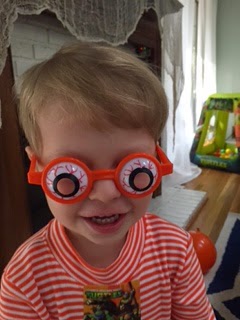 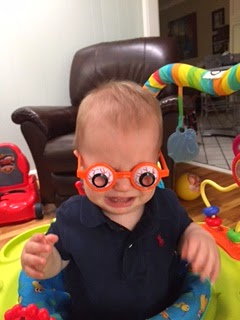 Between the school party and Halloween, I got sick with a nasty chest cold. It was so bad, I had to cancel a playdate, and you know I love a playdate. I also gave that nasty chest cold to Peepers. I took him to the doctor on Friday morning. Our wonderful pediatrician reassured me that it was just a cold, and that his lungs and ears were clear.

So I took him Trick-or-Treating! This is the part that went well! 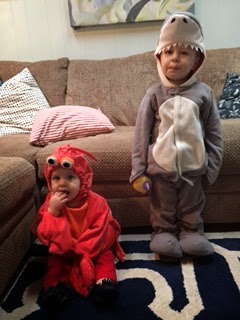 Seafood Platter!
These pictures are all from my iPhone. Why? Because Brooks was in charge of the camera, and all the pictures look like this... 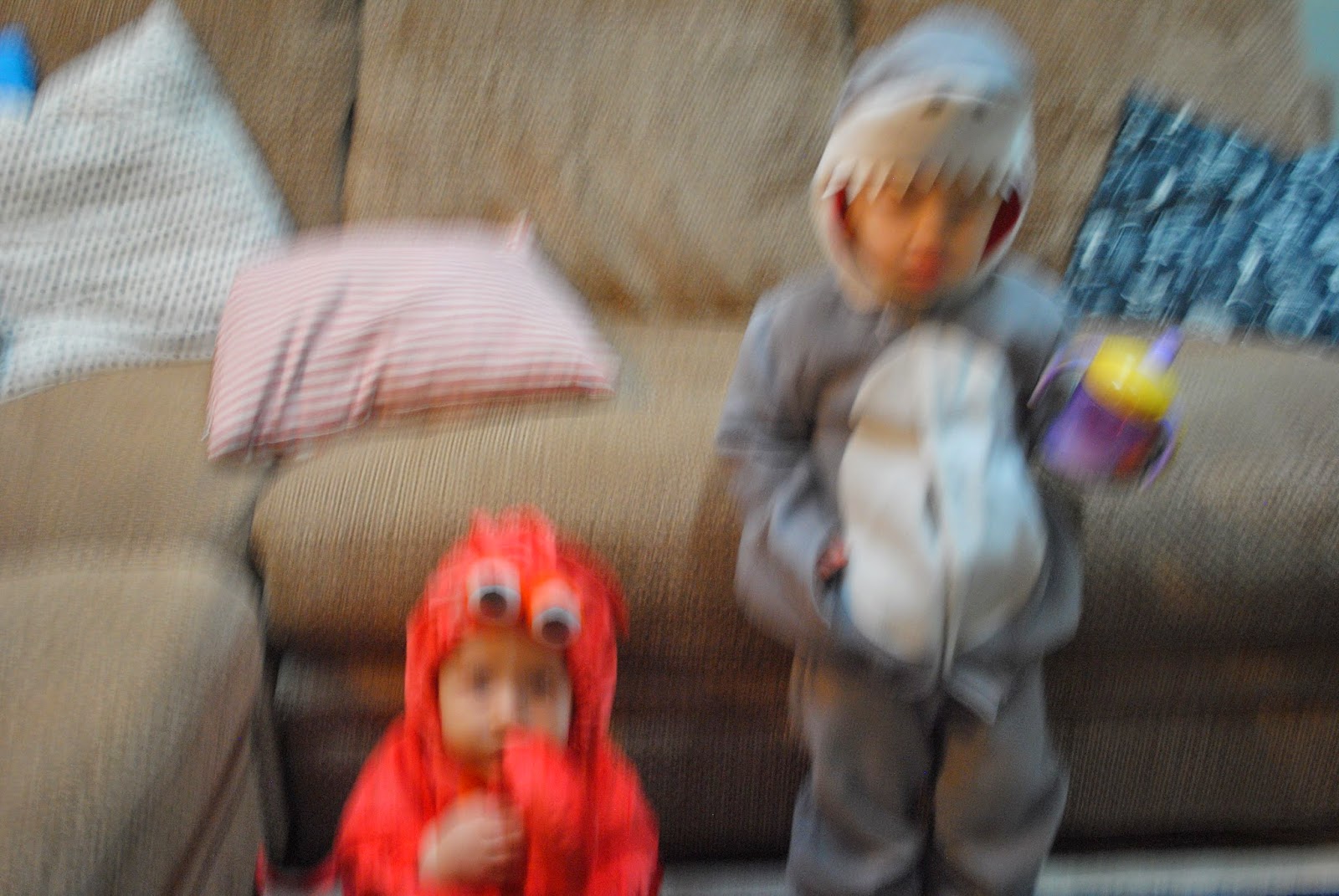 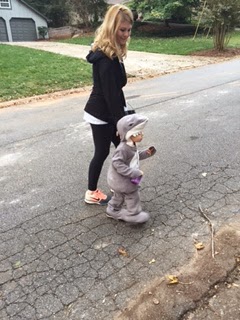 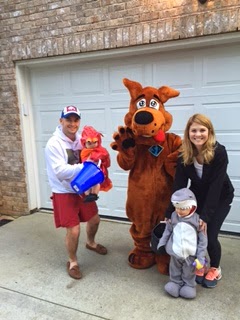 On Saturday, Gaines began to act worse. His fever kept rising, and his cough sounded terrible. He would cough so hard that he couldn't catch his breath and he even threw up. When he woke up after his afternoon nap, his fever was at 103.7, so we lost our Children's ER virginity. Thankfully, they reassured us (for the second time) that it was indeed just a really bad cold. Oh, and everyone from the doctors to nurses to even the valet guy at Children's Hospital (Scottish Rite) were amazing and kind and exactly who you want taking care of your sick child.

And not to make this about me (yeah right), but during this time I still had a terrible cough, and G's lack of appetite caused me to get backed-up and develop a mild case of mastitis. So yeah.

Playdate with Jessica and Alli

Soooooo, long time no post. The end of October was not the best of times. Lots of stress, lots of sickness. But even better? Lots of Jesus.

When I get stressed and try to handle situations myself, I have to remember that He is bigger than all my circumstances. I mean, He overcame death, so who am I to worry about anything?! He doesn't always keep me from hard times, but He does walk with me through them. And isn't that awesome?!

Something that did go well during the past two weeks is that Jessica came to visit Alli and me. We were so excited. We did our best to get a group shot of the children. Aren't these kiddos precious? 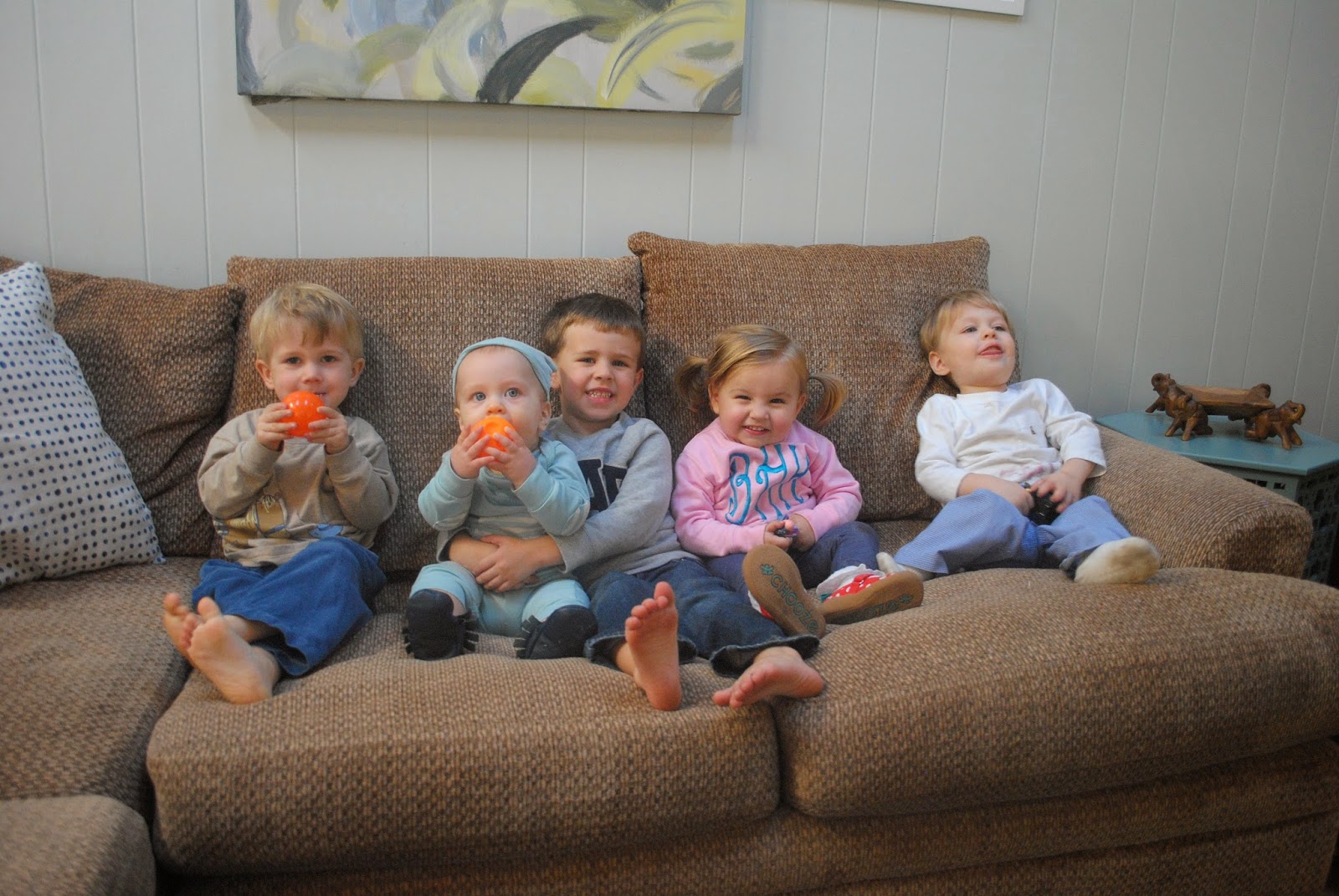 Burke (Jessica's son), Gaines, Jackson and Blakely (Alli's children). and Woody
And Jessica is pregnant with #6! A girl! 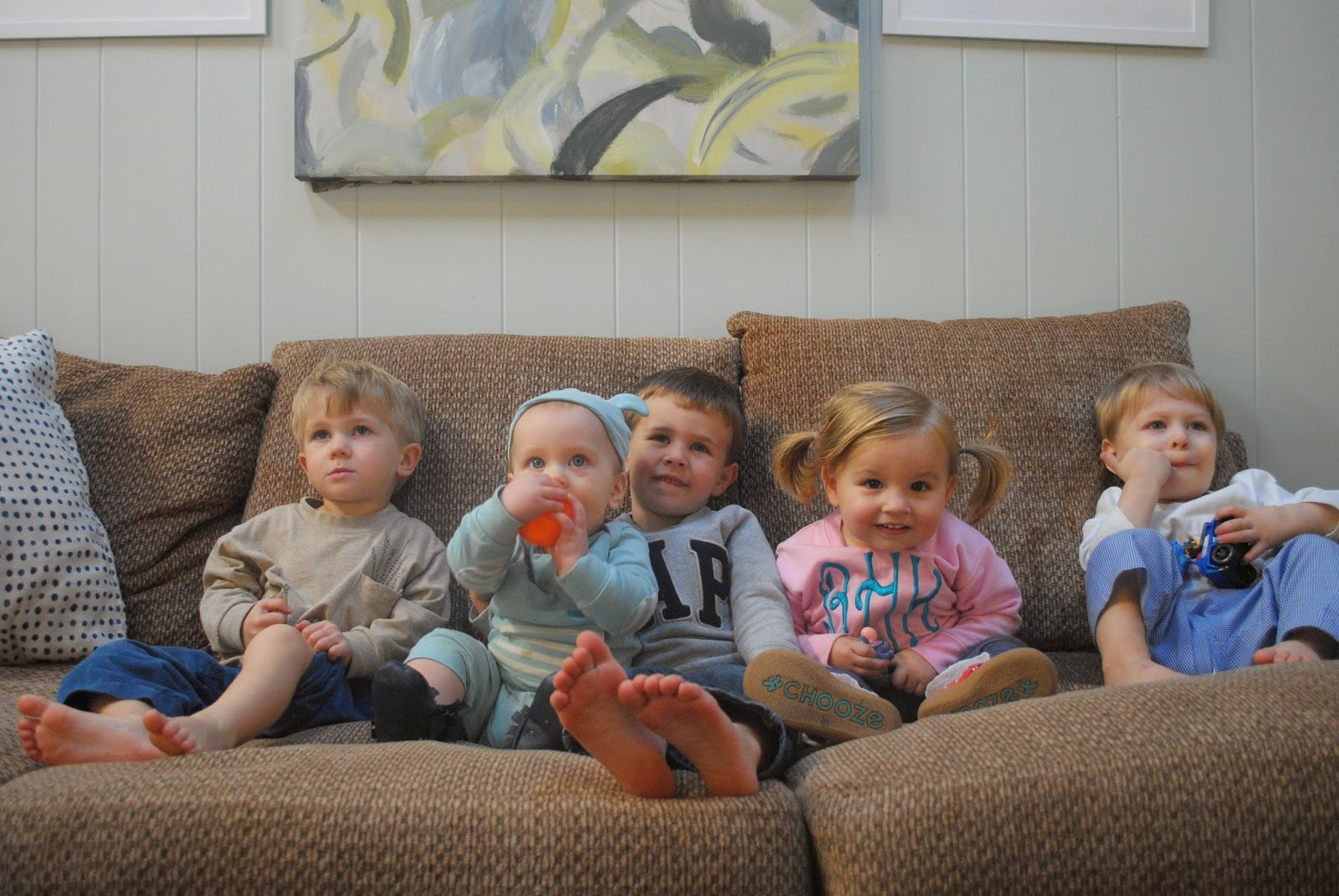 Clearly, everyone except Blakely was watching Disney Jr 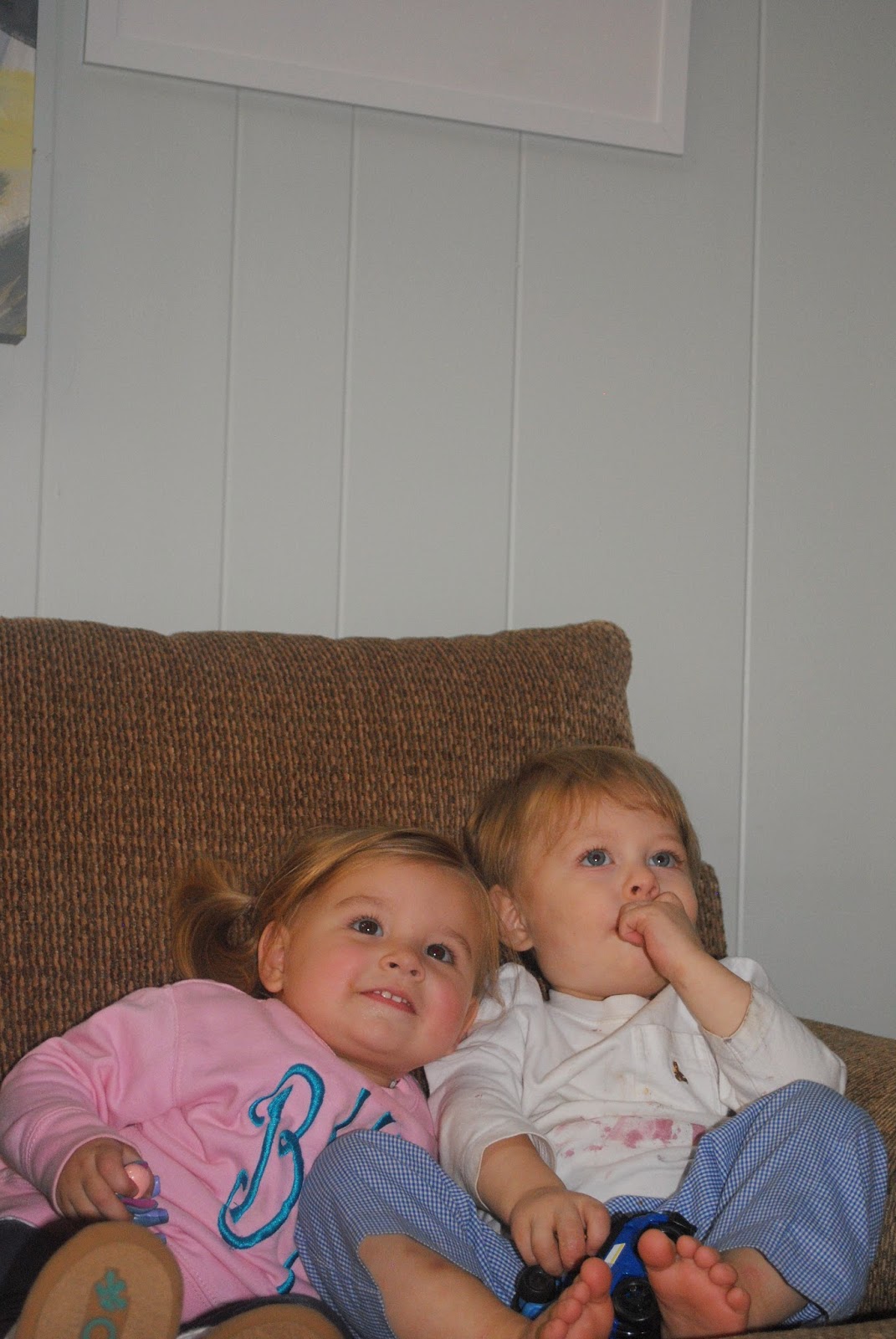 Do you not die? I hope they get married. Seriously. Mostly so I can like Woody's in-laws. And because they would have a fun wedding. Their children would have ridiculous cheeks as Alli noted. Am I getting ahead of myself?

There was good food and a jump house too, but I failed to document it. We were just so excited to have Jessica back. I hope her new friends aren't reading this, because we completely plan on kidnapping and bringing her back.

Thanks for moving back visiting, Jessica!
Posted by Lindsey at 9:01 PM 1 comments